Mexico has begun to swear in members of self-defense groups for its newly created rural police force, as part of a drive to disarm local vigilantes.

The move is designed to bring the militias fighting the Knights Templar drugs cartel in the western state of Michoacan under official control.

The vigilantes say they “cleaned” a number of towns before federal forces joined them in recent months.

But there have also been clashes among vigilantes and with police forces. 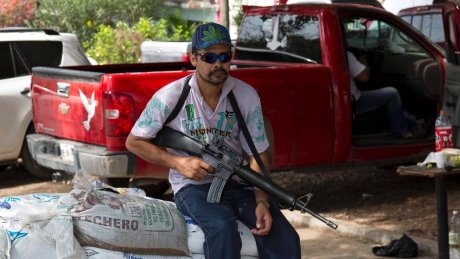 More than 3,000 people have registered guns and signed up for the new force, officials say.

But many refused to join, despite warnings that they would be arrested.

The Mexican government’s deadline for registering the firearms expired on Saturday.

“Those who 15 months ago said ‘Enough’ and decided to confront those who did them harm – because of them today we have the State Rural Force that carries the same conviction of justice, of courage, valor, bravery needed to protect those, who we love the most, our families,” Alfredo Castillo told the farmers.

The self-defense groups in Michoacan started an offensive against the Knights Templar drugs cartel more than a year ago.

Residents of Michoacan say the cartel terrorized them.

Local farmers, shop owners and other residents were victims of extortion, robbery and kidnappings.

During incursions backed by federal reinforcements in the last months, the head of the Knights Templar cartel, Nazario Moreno Gonzales, has been shot dead and many of the group’s leaders arrested.

Following the success in anti-cartel operations, the government demanded the self-defenses to stand down and leave the task of guaranteeing their security to the state.

But some fear that might encourage a come back from the cartel.

There have also been splits in some self-defense groups and the rise of fake vigilantes, correspondents say. The government now wants the rural force to work alongside the police.