Silvio Berlusconi is due to start a year of community service at a care home near Milan.

The Catholic care home says Silvio Berlusconi, 77, will be treated like any other assistant.

The billionaire has been embroiled in a string of court cases.

His conviction last year was in connection with the purchase of TV rights by his firm, Mediaset, in the 1990s. 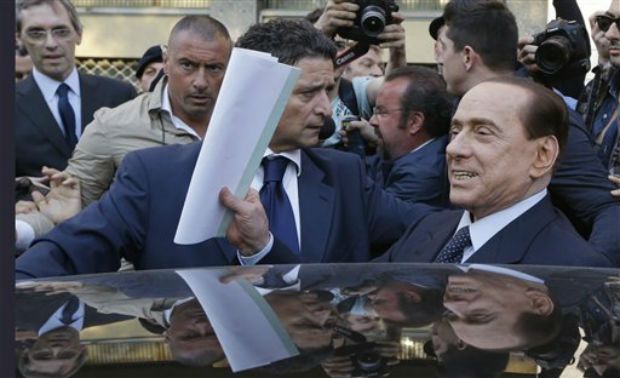 Silvio Berlusconi was spared prison because the Italian legal system is lenient to the over-70s.

He chose community service rather than house arrest to serve out his commuted sentence.

This will enable him to continue to lead his centre-right party, Forza Italia, in the European elections, although he has been forced to resign his seat in the upper house of parliament.

Silvio Berlusconi has also had to surrender his passport and his travel within Italy is severely restricted.

He also has to observe a nightly curfew at his palatial home near Milan.

Silvio Berlusconi is said to have been studying Alzheimer’s disease in preparation for his community service. He was due to arrive at the San Pietro care home in Cesano Boscone at 09:45 local time.

Massimo Restelli, head of care services there, told La Repubblica newspaper that Silvio Berlusconi’s introduction would be “gradual” so that he and the elderly patients could get used to each other.

“It will be small steps so as not to make any mistakes, and then he could do all sorts of things. He could help with meals, which are tricky because sometimes you have to ‘remind’ the patient that they are eating,” he said.

He said Silvio Berlusconi would be accompanied at all times by a medical worker specialized in Alzheimer’s.

“We’ll see if Berlusconi’s presence creates some kind of close bond, if he is a reference for anyone,” he added.

Silvio Berlusconi has always denied the charges against him, accusing left-wing judges of a witch-hunt.