Russia held a huge parade to mark 69 years since the Soviets defeated the Nazis, amid a surge of patriotism over the annexation of Crimea from Ukraine.

President Vladimir Putin said it was a day when an “overwhelming force of patriotism triumphs”, and vowed to defend the interests of the motherland.

Festivities in Ukraine will be muted amid fears of provoking further violence in the south and east.

Vladimir Putin did not mention Ukraine in his speech, instead stressing how the “iron will of the Soviet people” had saved Europe from slavery.

He told the crowd that May 9, known as Victory Day in Russia, was a “day of grief and eternal memory”. 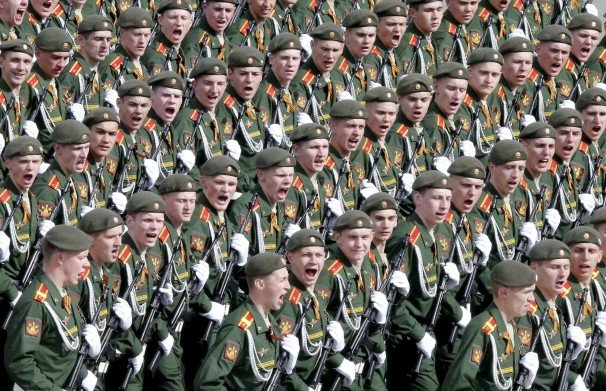 “It is a holiday when an overwhelming force of patriotism triumphs, when all of us feel particularly acutely what it means to be loyal to the motherland and how important it is to defend its interests,” Vladimir Putin said.

German Chancellor Angela Merkel said it would be a pity if Vladimir Putin were to use the commemorations to visit Crimea.

The parade in Moscow traditionally features a display of military hardware and a show of patriotic fervor on Red Square.

The scope of this year’s event was bigger than usual:

“Roadblocks have been set up around our capital, where serious checks are being carried out, because we expect that provocative actions may occur on May 9,” said Ukraine’s acting President Oleksandr Turchynov.

A low-key wreath-laying ceremony is planned in Kiev.

In south and eastern Ukraine, pro-Russian separatists have said they will go ahead with independence referendums on Sunday.

Vladimir Putin had called for the referendums on autonomy to be postponed to create the conditions for dialogue.

Activists remain in control of many official buildings across the south and east despite a military operation by Kiev to remove them. Dozens of people have been killed in the unrest.

Ukraine is preparing for elections on May 25 following the ousting of pro-Russian President Viktor Yanukovych in February by pro-Western protesters.

Nazi Germany invaded the USSR – which included Ukraine – in June 1941 and advanced almost as far as Moscow before being driven back to Berlin in some of the fiercest fighting of the war.

Russia estimates that 26.6 million Soviet citizens were killed in the war, about 8.7 million of them members of the armed forces.