Scientists say Viagra and Cialis could be used to fight Duchenne muscular dystrophy in boys.

In tests the drugs helped improve blood flow to the muscles of boys with DMD.

Scientists at the Cedars-Sinai Institute in Los Angeles hope the drugs could slow the onset of the disease, which causes the breakdown and gradual loss of muscle fibres.

But experts warn the study did not show an improvement in the boys’ ability to walk, and was not a “big breakthrough”.

DMD affects one in every 3,500 newborn boys, and many will die before they reach 30. 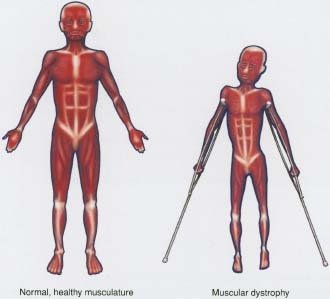 DMD affects one in every 3,500 newborn boys, and many will die before they reach 30

It can become fatal when it affects the muscles needed to breathe and pump blood around the body.

Many patients with the condition have to use a wheelchair by the age of 10, and there is currently no effective treatment.

Corticosteroids, currently used for short-term treatment, have a range of side effects, from acne, muscle weakness and stomach ulcers to diabetes, osteoporosis and high blood pressure.

Scientists looked at the new treatment in a study of 10 boys with DMD aged between eight and 13.

Boys with DMD had “blood flow abnormalities” despite taking corticosteroids, they said.

The boys, who had previously been taking corticosteroids, were given a single dose of either sildenafil, commonly known as Viagra, or tadalafil, known as Cialis, which are also used to treat erectile dysfunction.

The dose was given and the blood flow in the boys’ muscles was measured after one hour, for Viagra and after three hours for Cialis.

It was measured when they were resting and then doing a handgrip exercise, after taking corticosteroids, Viagra and Cialis.

Their blood flow was compared with 10 boys of the same age who didn’t have DMD.

The study said blood flow to the muscles was improved in boys treated with both Viagra and Cialis, compared with when they were taking corticosteroids.

The blood flow of boys with DMD increased by 32% after exercise without either treatment.

But after treatment with Cialis, their blood flow increased by 63%. This compares with 78% in “healthy” boys.

The study built on earlier work in zebra fish and mice.