Vladimir Putin says Ukraine’s May 25 presidential election is a step “in the right direction”.

However, the Russian president said the vote would decide nothing unless the rights of “all citizens” were protected.

Ukraine’s interim PM Arseniy Yatsenyuk described as “hot air” Vladimir Putin’s call for an independence referendum, planned this weekend by separatists in the east, to be delayed.

Vladimir Putin also said that Russia had pulled back its troops from the border, as tension remains high. 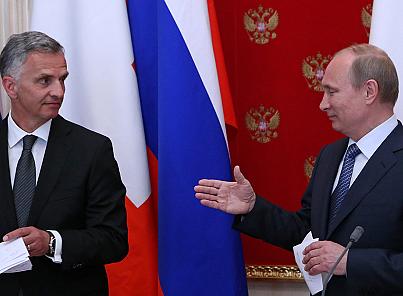 Moscow has said it will protect the rights of the largely Russian-speaking people in the south and east against what it calls an undemocratic government in Kiev.

Kiev has rejected pro-Russian activists’ demands for greater autonomy, fearing it could lead to the break-up of the country, and has sent in troops in recent weeks to seize back official buildings occupied by rebels.

Vladimir Putin suggested that Kiev’s military operation in eastern Ukraine could be halted in exchange for a postponement of the referendum scheduled to take place in several areas on Sunday.

Arseniy Yatsenyuk accused Vladimir Putin of “talking through his hat”.

Earlier on Wednesday, pro-Russian separatists took back the city hall in the southern port of Mariupol after it was briefly taken over by Ukrainian government forces.

Vladimir Putin made his suggestion after talks in Moscow with Didier Burkhalter, the Swiss president and current chairman of the Organization for Security and Co-operation in Europe (OSCE).

On the forthcoming presidential elections, Vladimir Putin said: “I would like to stress that… while they are a move in the right direction, [they] will not decide anything if all the citizens of Ukraine fail to understand how their rights are protected after the elections are held.”

Vladimir Putin also said he had pulled back Russian forces from the border with Ukraine to “places of regular exercises, at training grounds”, although NATO said it had “not seen any significant change to the disposition of troops along the border”.