A cousin of Tyrannosaurus rex with a very long nose has been nicknamed Pinocchio rex.

The ferocious carnivore is 9m-long with a distinctive snout.

Its skeleton was dug up in a Chinese construction site and identified by scientists at Edinburgh University, UK. 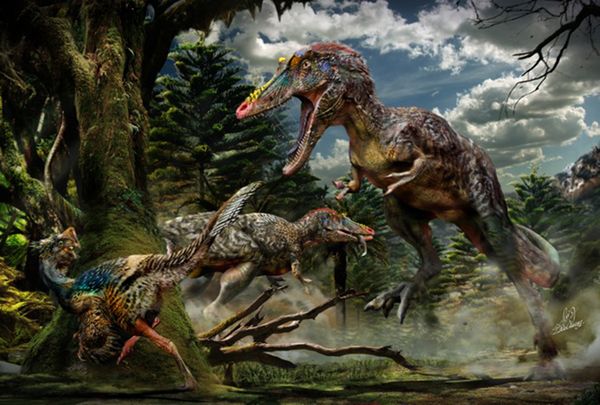 “It had the familiar toothy grin of T. rex, but its snout was long and slender, with a row of horns on top,” said Edinburgh’s Dr. Steve Brusatte.

“It might have looked a little comical, but it would have been as deadly as any other tyrannosaur, and maybe even a little faster and stealthier.

“We thought it needed a nickname, and the long snout made us think of Pinocchio’s long nose.”

Researchers now think several different tyrannosaurs lived and hunted alongside each other in Asia during the late Cretaceous Period, the last days of the dinosaurs.

The enormous Tarbosaurus (up to 13 m) had deep and powerful jaws like T. rex – strong enough to crush the bones of giant herbivores.

The thinner teeth and lighter skeleton of Qianzhousaurus suggest it hunted smaller creatures, such as lizards and feathered dinosaurs. But at 9 m tall and weighing almost a tonne, it was still a gigantic carnivore.

Pinocchio’s snout was 35% longer than other dinosaurs of its size.

The discovery of “Pinocchio” settles an argument over a series of strange new fossil finds.

Paleontologists are now confident that Qianzhousaurus and Alioramus are part of a new subgroup of tyrannosaurs with elongated skulls.

Their discovery from Mongolia to southern China suggests these “second tier” carnivores were widely distributed, according to Prof Junchang Lu of the Chinese Academy of Geological Sciences, a co-author on the paper.

With these “weird” creatures now accepted as being part of a whole family, more and more of their long-snouted relatives are expected to be unearthed.

As for the riddle of Pinocchio’s nose, the scientists hope to solve it via biomechanical studies of its jaw – which may hint at its feeding habits.