Three acrobats of Ringling Bros. circus remain in critical condition in hospital after a group of “hairilists” fell from an aerial platform at a show in Rhode Island on Sunday.

Eight acrobats plummeted up to 40ft when the scaffolding structure holding them collapsed.

The performers, from the US, Brazil, Bulgaria and Ukraine, were in the middle of a hair-hanging high-wire act.

Authorities continue to investigate the cause of the accident. 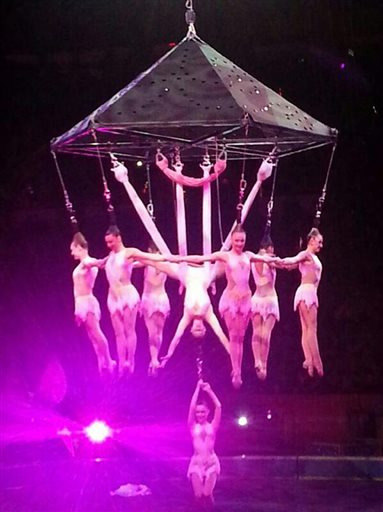 Viktoriya Medeiros and Viktorila Liakhova have been listed in serious condition, while performers Samantha Pitard, Svitlana Balanicheva and Widny Nevas are now considered in good condition.

The names and conditions of three other people hurt were not released.

“A lot of them were awake, talking, communicating with us.”

The collapse occurred during an act in which the eight performers hanged from their hair “like a human chandelier”, according to the circus.

According to the circus website, the eight performers, known as “hairialists”, feature in a “larger-than-life act… spinning, hanging from hoops, and rolling down wrapped silks all while being suspended 35ft in the air by their hair alone”.

The metal frame from which the acrobats hung is said to have come free from a metal truss, a circus spokesman told US media.

Further performances were cancelled on Sunday and Monday as the circus worked with federal and local officials.