Michelle Knight, one of three victims held captive for more than a decade inside Ariel Castro’s house of horrors in Cleveland home, said she forgives her captor “because that’s the way of life”.

Michelle Knight, 33, said she has been relishing her freedom since her rescue from the Cleveland house of horrors last year on May 6.

She told NBC’s Today that she holds no grudge against Ariel Castro, who tortured and abused her after kidnapping the then-21-year-old woman in 2002.

“If I did something wrong, even if it was a small thing, I would want somebody to forgive me,” she told the news show on Monday.

“So I can forgive him for what he done wrong because that’s the way of life.”

Michelle Knight said that she no longer likes the color pink, because it reminds her of a third-floor room in Ariel Castro’s home, where he tied her up “like a fish”. 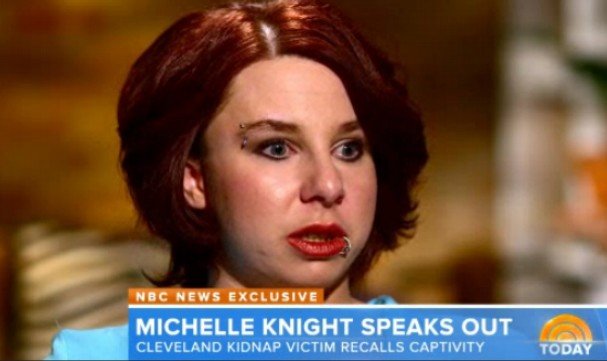 She recalled even feeling sorry for Ariel Castro, 53, when he hanged himself in prison after he was convicted.

“I was saddened by it, but also confused at the same time,” she said.

“He was a human being. And every human being needs to be loved, even though they did something wrong.”

Michelle Knight’s comments came after she told NBC’s Dateline on Sunday that she can recall with terrifying detail the pink third-floor room where the madman kept her chained.

“I really don’t like the color pink,” she told the news station while looking at a model of the house.

“That’s the first room that the torture began.”

Michelle Knight – who was rescued with Amanda Berry and Gina DeJesus from the house of horrors on May 6, 2013 – said the monster would leave her for hours after he “tied me up like a fish, right there on the wall”.

Michelle Knight – whose memoir, Finding Me, is slated to hit bookshelves on Tuesday, the year anniversary of her rescue – said she often thought of her son, Joey, to fight back recurring thoughts of suicide.

“The love of my son held me through,” she told Today show.

Michelle Knight’s son, who was just a toddler when Knight was abducted, has since been placed in foster care. But she hopes to reunite with the boy soon.

She said that she has been enjoying her freedom over the past year by enjoying exercising, taking cooking classes and recording music.

Michelle Knight said she dropped her name and changed it to Lillian Rose Lee to symbolize her new life.

“I felt like every brand new start needs new beginnings,” she told the news show.

Michelle Knight’s book is expected to explain her captivity in frightening detail, including accounts of how Ariel Castro repeatedly raped and tortured her.