According to the latest figures from the Labor Department, the US economy created 288,000 jobs in April, the strongest monthly job creation since January 2012.

The largest jobs gain came in professional and business services, which added 75,000 jobs during the month.

The unemployment rate fell to 6.3%, according to the Labor Department.

However, economists caution that figure was flattered by a sharp decline in the size of the labor force. 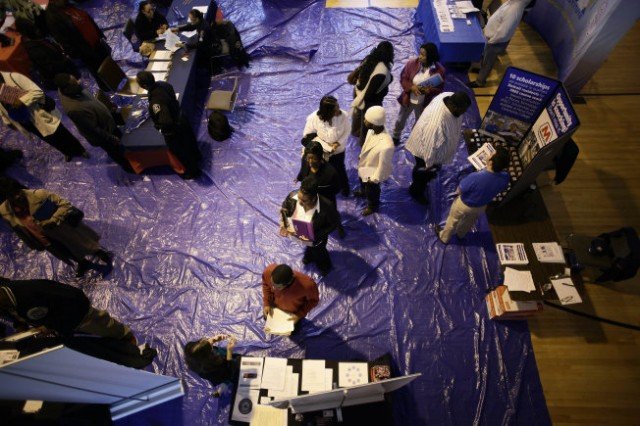 The US economy created 288,000 jobs in April, the strongest monthly job creation since January 2012

Nevertheless it is the lowest unemployment rate since September 2008.

There was also some disappointment over weak wage growth. Average hourly earnings in the private sector did not increase in April and over the past year wages are up a modest 1.9%.

The latest unemployment figures are another piece of evidence showing that the US economy is recovering from a harsh winter.

The weather was blamed for a sharp slowdown in US growth in the first quarter to an annual rate of 0.1%.

But economists say Friday’s strong job report underlines that the GDP figures released on Wednesday were an anomaly.

On Wednesday, the Federal Reserve continued to cut back its effort to boost the economy.

The Fed said it would trim its monthly bond purchases by an additional $10 billion to $45 billion.