Sloviansk separatists have shot down two of Ukraine’s army helicopters during an “anti-terror” operation in the eastern city, Kiev says.

Dmitry Peskov said that contact had been lost with Russian envoy Vladimir Lukin sent to the south-eastern Ukraine.

Russia’s foreign ministry earlier warned that any assaults by Ukraine’s troops in the region would have “catastrophic consequences”, triggering fears of an invasion by Moscow.

Separately, reports are coming that several foreign journalists have been detained in Sloviansk. 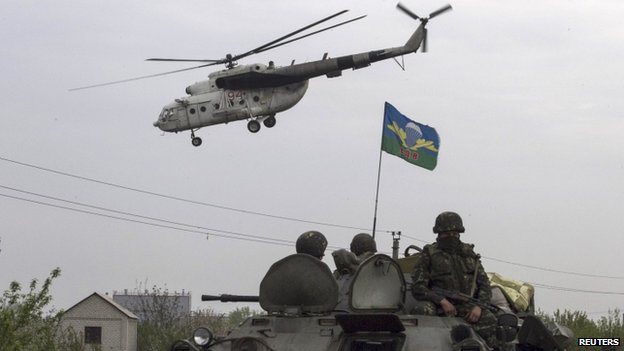 Sloviansk is a stronghold for pro-Russian separatists who are exerting increasing control in the region.

In a statement on Friday, Ukrainian Interior Minister Arsen Avakov said the “active phase” of the operation began at 04:30 local time.

He said interior troops and the National Guard were involved in the operation in the Sloviansk-Kramatorsk region.

“A real battle with professional mercenaries is going on,” Arsen Avakov said, adding that the separatists were using the tactics of hiding behind civilians in residential buildings.

It quoted Sloviansk’s rebel leader Igor Strelkov as saying that the city was completely sealed off.

The fighting appears to be concentrating on the periphery of the city.

However, there were no reports of Ukrainian government troops entering the city itself.

Local residents were later quoted as saying that the situation in the city calmed down but remained tense.

Eastern Ukraine has a large Russian-speaking population and was a stronghold for President Viktor Yanukovych before he was overthrown by pro-Western protesters in February.

The crisis has plunged East-West relations to their lowest point since the Cold War ended in the early 1990s.

For his part, Vladimir Putin reiterated his call for Kiev to withdraw troops from the south-east to open the way for a national dialogue.

Angela Merkel is due to meet President Barack Obama in Washington on Friday to discuss the crisis in Ukraine.