At least 170 people have been injured after two subway trains collided in the South Korean capital Seoul.

A number of people were taken to hospital for treatment, but no-one suffered serious injuries, officials said.

The accident happened after one train ran into the back of another that had stopped at the Sangwangsimni Station in east Seoul. 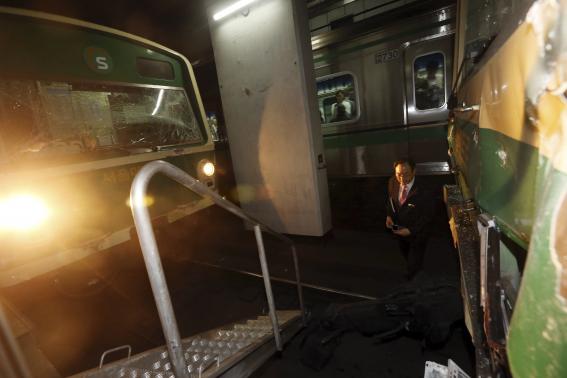 It comes as the nation continues to mourn the deaths of about 300 people in last month’s ferry disaster.

The Sewol ferry sank with 476 people aboard – most of them high school students and teachers – off South Korea on 16 April.

Friday’s crash happened at around 15:30 local time at the Sangwangsimni Station on one of Seoul’s major subway lines, the South Korean news agency Yonhap reports.

Yonhap said the stationary train had stopped because of mechanical problems when the second train ran into the back of it.

A witness said many passengers ignored an onboard announcement telling them to stay inside and forced the doors open, escaping on to the tracks.

One official said 170 people had complained of feeling pain after the accident, and 32 were taken to a nearby hospital, but no-one was seriously hurt, the Associated Press reports.