Pharrell Williams was teary-eyed as he accepted the Innovator award at the inaugural iHeartRadio awards in Los Angeles.

Pharrell Williams, whose single Happy has become an international sensation, was lost for words for over a minute as Gwen Stefani presented him with the trophy.

Rihanna also took home four prizes, including artist and song of the year. 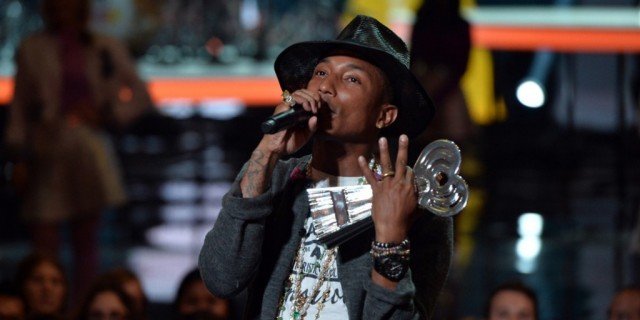 Rihanna, who got stuck in traffic en route to the show, also won an award for having the most loyal fans.

She dedicated the award to her followers, and thanked them for embracing her, flaws and all.

“It’s not easy, what we do. It’s very difficult at times,” she said.

“I never felt comfortable being anything other than myself.”

Owned by media company Clear Channel, iHeartRadio is one of the dominant internet radio brands in the US.

Thursday’s awards show was broadcast by over 150 iHeart radio stations across the US, and 60 million votes were cast by listeners in the run-up to the ceremony.

Pharrell Williams, 41, performed a 10-minute medley of his songs at the show, including Happy, Come Get It Bae and his bestselling-collaboration with Daft Punk, Get Lucky.

The artist, who began his career producing songs for the likes of Justin Timberlake, Jay Z and Kelis, said he had never expected to become an artist in his own right.

“All I did was write the songs and you guys did all the heavy lifting, all the hard work,” he told the audience at the Shrine Auditorium in Los Angeles.

During the interview, Oprah Winfrey showed Pharrell Williams a montage of fans from Africa, the Philippines, Iceland and many more, all singing Happy, his Oscar-nominated, gospel-tinged, feel-good anthem.