The IMF has approved a $17.1 billion bailout for Ukraine to help the country’s beleaguered economy.

The loan comes amid heightened military and political tension between Ukraine and neighboring Russia.

The loan is dependent on strict economic reforms, including raising taxes and energy prices.

The money will be released over two years, with the first installment of $3.2 billion available immediately.

The head of the International Monetary Fund, Christine Lagarde, said the fund would check regularly to ensure the Ukrainian government followed through on its commitments. 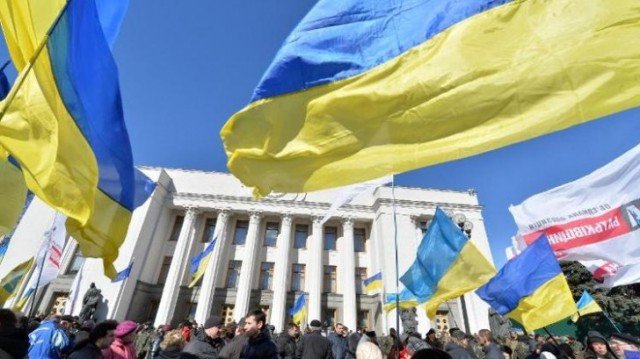 The IMF has approved a $17.1 billion bailout for Ukraine to help the country’s beleaguered economy

In March Ukraine put up gas prices by 50% in an effort to secure the bailout.

The government has also agreed to freeze the minimum wage.

The bailout had to be approved by the IMF’s 24-member board, which includes a Russian representative.

The IMF loan will also unlock further funds worth $15 billionn from other donors, including the World Bank, EU, Canada and Japan.

In December last year, Ukraine agreed a $15 billion bailout from Russia, but this was cancelled after protests forced out pro-Russian President Viktor Yanukovych.

On Wednesday, the IMF warned that Russia was “experiencing recession” because of damage caused by the Ukraine crisis.

The fund said $100 billion would leave Russia this year, partly caused by the US and EU sanctions.

The sanctions were imposed after Russia annexed the Crimea region from Ukraine last month.

The IMF bailout will also make available $1 billion in loan guarantees from the US, which was recently approved by Congress.

Earlier on Wednesday, an international conference in London ended with a commitment to help Ukraine recover tens of billions of dollars worth of assets which were allegedly stolen by the ousted President Viktor Yanukovych and his allies.