The NBA is investigating a report alleging that Donald Sterling, the owner of the Los Angeles Clippers, made racist remarks.

In a recording posted by TMZ, a man it says is Donald Sterling is heard asking his girlfriend V. Stiviano not to broadcast her association with black people nor bring them to games.

The NBA described the remarks as “disturbing and offensive”.

Donald Sterling later told TMZ the recording “does not reflect his views”. 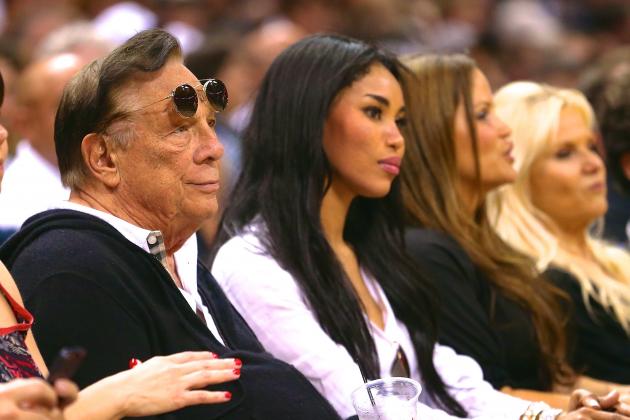 In a recording posted by TMZ, a man it says is Donald Sterling is heard asking his girlfriend V. Stiviano not to broadcast her association with black people nor bring them to games

The celebrity website published the 10-minute audio recording on Friday.

The conversation is alleged to have taken place after V. Stiviano posted a photo of herself online with the basketball legend, Magic Johnson.

The man specifically mentions Magic Johnson on the recording, saying: “Don’t bring him to my games, OK?”

It was not clear how or when the conversation was recorded.

“We are in the process of conducting a full investigation into the audio recording obtained by TMZ,” NBA spokesman Mike Bass said in a statement.

“The remarks heard on the recording are disturbing and offensive, but at this time we have no further information.”

Magic Johnson later responded on Twitter, saying: “I will never go to a Clippers game again as long as Donald Sterling is the owner.”

He also said the alleged comments were “a black eye for the NBA”.

In a joint statement later published by TMZ, Donald Sterling and the Clippers said: “We have heard the tape on TMZ. We do not know if it is legitimate or it has been altered.”

“We do know that the woman on the tape – who we believe released it to TMZ – is the defendant in a lawsuit brought by the Sterling family.

“Mr. Sterling is emphatic that what is reflected on that recording is not consistent with, nor does it reflect his views, beliefs or feelings. It is the antithesis of who he is, what he believes and how he has lived his life.”

The statement adds: “He feels terrible that such sentiments are being attributed to him and apologises to anyone who might have been hurt by them.”

Donald Sterling bought the Clippers in 1981.