A multiple-day severe weather outbreak will begin this weekend over the South Central states and will include the potential for nighttime tornadoes in parts of Texas, Oklahoma, Kansas and Nebraska.

A storm will move slowly across the US over the next seven to 10 days. The storm will affect Southern California with locally drenching rain and mountain snow on Friday. Its next stop will be the Central states this weekend.

While the central and southern Plains are in need of rain, it will come with the price tag of violent storms.

Since the parent storm will not arrive on the scene until late in the day Saturday, most storms are not forecast to ignite until the late-day and nighttime hours. 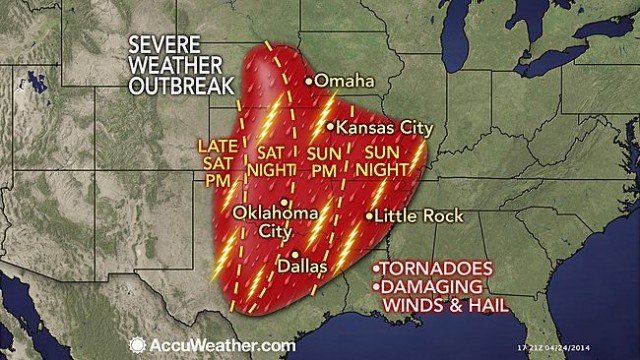 Because the storms will be passing through large metropolitan areas, the storms have the potential to bring extensive damage, risk to a great number of lives and significant travel disruptions.

According to AccuWeather Enterprise Solutions Storm Warning Meteorologist Scott Breit, “Supercell thunderstorms will develop along the dry line from west-central Kansas to the Oklahoma Panhandle and northwestern Texas late Saturday afternoon with large hail and tornadoes a good bet.”

A dry line marks the boundary between desert air to the west and moist Gulf of Mexico air to the east. A supercell thunderstorm is a long-lived, intense storm that often develops rotation and has an elevated risk of producing tornadoes, damaging winds gusts, frequent lightning strikes and very large hail.

Aiding the development of severe thunderstorms will be a surge of warm, humid air on Saturday.

The threat for violent storms, including a few supercells, will continue to push eastward Saturday night across rural and populated areas of central Kansas, central Nebraska, central Oklahoma and central Texas.

The storms are likely to shift to the east of Oklahoma City in time for the Memorial Marathon Sunday morning. However, if the storms are slower to leave than expected, or damage occurred from the night before, a delayed start cannot be ruled-out.

Because many of the most violent storms will continue after dark, there is an elevated danger factor. People may not see that a tornado is approaching their location.

Anyone traveling through the area or spending time outdoors will want to keep an eye out for rapidly changing weather conditions.