A man has died in northern Italy after being crushed by a crucifix erected in honor of Pope John Paul II.

Marco Gusmini, 21, was killed instantly and one other man taken to hospital, Italian media reported.

Part of the 100ft-high sculpture collapsed at a ceremony ahead of the Pope’s canonization.

Pope John Paul II and his predecessor, Pope John XXIII, are due to be declared saints on Sunday. 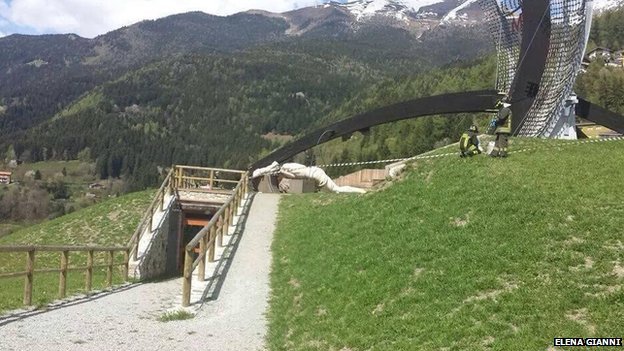 The crucifix commemorates the Pope’s visit to the area in 1998.

The installation, near the town of Cevo, was designed as a large curved cross with a statue of Jesus Christ, weighing 1,320lb, fixed to the top.

A group of children were reported to be in attendance at the time.

The cross was designed by sculptor Enrico Job and was created for John Paul II’s visit to nearby Brescia.

The two popes will be declared saints at the Vatican on Sunday.

It is not the first death caused by a falling crucifix in Italy.

In 2004, the Associated Press reported that a 72-year old woman had been crushed to death by a 7ft-tall metal crucifix in the town of Sant’Onofrio in the south of Italy.