The Ocean Shield acquired the signal twice, once for more than two hours, said Air Chief Marshal Angus Houston, who is leading the search.

He called it the “most promising lead” so far.

However, ACM Angus Houston said more information was needed: “We haven’t found the aircraft yet and we need further confirmation.”

Malaysia Airlines plane, carrying 239 people, was flying from Kuala Lumpur to Beijing on March 8 when it disappeared. Malaysian officials say they believe it crashed in the southern Indian Ocean.

Two separate detections occurred, he said. The first was held for two hours and 20 minutes before being lost.

The ship then turned around and on the return leg detected the signal again for 13 minutes. 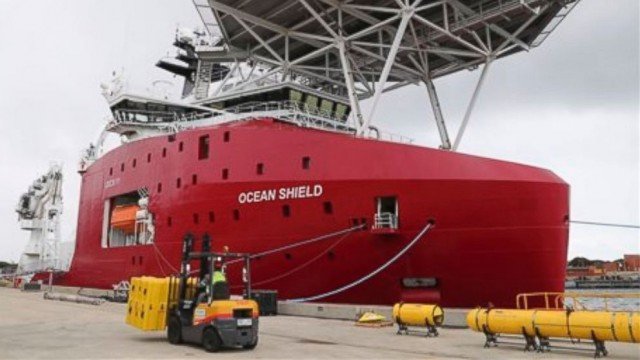 “On this occasion two distinct pinger returns were audible. Significantly this would be consistent with transmissions from both the flight data recorder and the cockpit voice recorder,” ACM Angus Houston said

“We are now in a very well defined search area, which hopefully will eventually yield the information that we need to say that [Malaysia Airlines flight] MH370 might have entered the water just here.”

The Ocean Shield was still in the area but had not been able to reacquire the signals since, he said.

The position of the signals needed to be fixed, ACM Angus Houston said. Once that happened, the Ocean Shield could lower the Bluefin 21 underwater autonomous vehicle to try to locate wreckage on the sea floor.

The signal had been heard in sea with a depth of 4,500m, he added, which was at the limit of the capability of the Bluefin 21.

ACM Angus Houston cautioned that the next steps would take time.

“It could take some days before the information is available to establish whether these detections can be confirmed as being from MH370,” he said.

The search operation is in a race against time as the flight recorders’ batteries are due to run out, meaning a signal would no longer be emitted.

A Chinese search vessel, Haixun 01, also said it briefly heard signals over the weekend in a different search area.

Those signals are now being investigated with the help of a British naval vessel, HMS Echo, which is equipped with sophisticated sound-locating equipment.

Reports said the crew of the Chinese ship had been using a sonar device called a hydrophone to pick up sounds.

Experts said it was technically possible but unlikely that the sounds heard with this equipment related to the missing plane.

Chris Portale, a director of the US company Dukane which makes the device that emits signals from flight recorders, said looking for the Malaysian plane’s “black boxes” was like “looking for a suitcase on the side of a mountain” but under water.

So far, not a single piece of wreckage has been found from the missing plane, but officials have concluded – based on satellite data – that it ended its flight in the sea to the west of the Australian city of Perth.