Malaysia PM Najib Razak said his country will not give up on the search for missing flight MH370, as he visited the search hub in Perth, Australia.

The Malaysian prime minister praised the search effort, saying the co-operation amid “great tragedy” had “given us all heart”.

Planes and ships have been scouring the southern Indian Ocean, where the jet is believed to have crashed.

But so far not a single piece of debris from the Boeing 777 has been found. 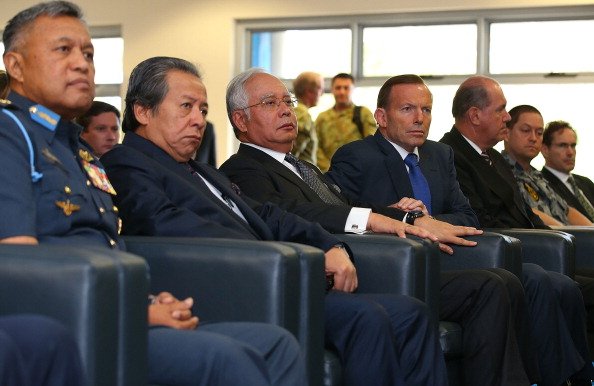 Najib Razak met search crews at Pearce RAAF base near Perth on Thursday morning, before their planes left for the day, and then later held talks with Tony Abbott.

“The disappearance of MH370 has tested our collective resolve,” he told a news conference.

“Faced with so little evidence, and such a Herculean task, investigators from Malaysia, the US, the UK, China, Australia and France have worked without pause to reveal the aircraft’s movements.”

He thanked both search teams and the Australian government for their efforts in recent weeks, and said the search would go on.

“I know that until we find the plane, many families cannot start to grieve. I cannot imagine what they must be going through. But I can promise them that we will not give up,” he said.

Malaysian authorities have come in for heavy criticism over their management of the search, especially from relatives of the plane’s 153 Chinese passengers.

On Thursday, eight military planes and nine ships were due to take part in the search.

Weather conditions were fair, with visibility of approximately 6 miles, the Joint Agency Coordination Centre (JACC) – which is overseeing the search – said.

The British submarine HMS Tireless is also in the southern Indian Ocean and is due to be joined by Royal Navy ship HMS Echo.

The Australian Navy ship Ocean Shield is heading to the region and has equipment for detecting the plane’s “black-box” flight recorder.

Experts say timing is critical as the flight recorder may only have enough battery power to send out a signal until April 7.

On Wednesday Malaysian police chief Khalid Abu Bakar said investigators had “cleared” all passengers of possible involvement in hijacking, sabotage or having personal or psychological problems that could have been connected to the disappearance.

But he said that the criminal investigation could “go on and on and on. We have to clear every little thing”.

The police chief said that more than 170 interviews had been conducted with family members of the pilots and crew members, and that even cargo and food served on the plane were being investigated in case of sabotage.