Turkey is voting in municipal elections that analysts say could determine the political future of PM Recep Tayyip Erdogan.

They are the first elections since mass protests erupted last June and a corruption scandal hit the government.

Recep Tayyip Erdogan is not standing but has campaigned tirelessly in support of his Justice and Development Party (AKP).

The government blocked Twitter and YouTube in the run up to the elections, following a series of online leaks. 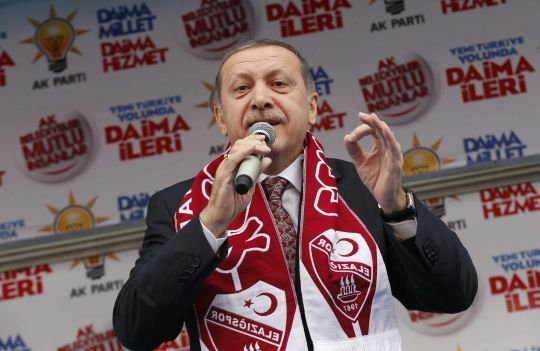 On Saturday pro- and anti-government factions held rival demonstrations in Istanbul, which saw the Gezi Park protests of May and June last year.

The opposition Republican People’s Party is fighting there to win the mayor’s office from Recep Tayyip Erdogan’s ally Kadir Topbas.

Recep Tayyip Erdogan is himself a former mayor of the city and the vote has become an unofficial referendum on his administration, our correspondent says.

The prime minister lashed out at his political opponents during a series of rallies on Saturday.

“They are all traitors,” he told the crowd in Istanbul.

“Go to the ballot box tomorrow and teach all of them a lesson. Let’s give them an Ottoman slap.”

Recep Tayyip Erdogan was forced to cancel a number of rallies on Friday on doctors’ orders to rest his voice.

The prime minister has purged hundreds of people from the judiciary and police since several of his allies were arrested over a corruption scandal in December.

He has accused the judiciary of being behind a series of wiretaps and social media leaks allegedly exposing major corruption, and blamed the probe on a “foreign plot”.

The scandal has pitted the prime minister against a former ally, US-based Islamic scholar Fethullah Gulen, who has many supporters in the police and judiciary.

Recep Tayyip Erdogan and his Islamic-leaning AK Party have been in power for over a decade.