President Barack Obama ruled out a “military excursion” by the US in Ukraine, saying that engaging Russia militarily “would not be appropriate.”

“We are not going to be getting into a military excursion in Ukraine,” Barack Obama said in an interview with KNSD in San Diego.

“What we are going to do is mobilize all of our diplomatic resources to make sure that we’ve got a strong international coalition that sends a clear message, which is that Ukraine should decide their destiny.”

“There is a better path, but I think even the Ukrainians would acknowledge that for us to engage Russia militarily would not be appropriate and would not be good for Ukraine either,” he added.

In a separate interview with KSDK in St. Louis, Barack Obama reiterated that a military option is not on the table but that the US and its allies are prepared to take “even more disruptive economic actions.” 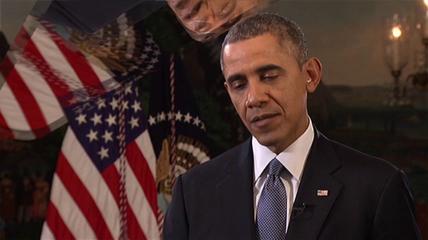 “Obviously, we do not need to trigger an actual war with Russia,” he said.

“The Ukrainians don’t want that. Nobody would want that.”

In the interview with KNSD, President Barack Obama insisted that Russian President Vladimir Putin “acted out of weakness, not out of strength,” saying that Putin is “not comfortable” with countries loosening their ties to the Kremlin in favor of more freedom to deal with the West.

“His strategic decisions are no way based on whether he thought that we might go to war over this,” Barack Obama added.

“I think there’s a clear understanding that when it comes to our core interests or our NATO allies we can protect ourselves.”