Donald Trump appeared on The Today Show to promote his 2014 Miss USA pageant airing on NBC in June, when the conversation turned to President Barack Obama and his weakness in handling Russia’s actions in Crimea.

“You’ve been critical of the president and his handling of the situation with Ukraine and Crimea,” the show co-host Matt Lauer said.

“I think you said, I’m paraphrasing here, but basically [Russian President Vladimir] Putin was playing with or toying with Obama. That is kind of a common refrain of yours, I should mention.”

Donald Trump replied that others have said the same thing.

“But you always think that Obama is being weak,” Matt Lauer said. 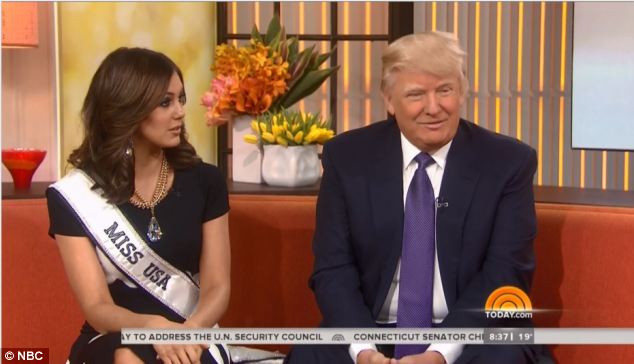 Donald Trump appeared on The Today Show to promote his 2014 Miss USA pageant, when the conversation turned to Barack Obama (photo NBC)

“What would you have done differently than he did in the days before Russian troops went into Crimea?”

The incursion should have never happened, Donald Trump said.

“If you’re the president, that doesn’t happen and it’s not a big surprise,” he said.

“I mean, it should have worked so that a thing like that doesn’t happen.”

The US should be strong in its reaction to Vladimir Putin, Donald Trump said.

“We should definitely do sanctions. And we have to show some strength. I mean, Putin has eaten Obama’s lunch, therefore our lunch, for a long period of time,” he said.