Two people are dead after a drunk driver crashed through barricades set up for the South by Southwest (SXSW) festival in Austin, Texas police says.

A man and a woman died and many others were injured on the crowded street in Austin.

The driver is thought to have been trying to escape from the police when the collision happened.

Austin Police Chief Art Acevedo said he had now been taken into custody after officers shocked him with a stun gun.

The driver will face two counts of capital murder over the crash, which took place about 12.30 a.m. local time on Thursday.

Art Acevedo confirmed the two people who died had been on a moped. Further details about the pair have yet to be released.

Many of the 23 who have been hurt were thought to have been leaving a club where a concert had been held. Five of the injured are said to be in a critical condition. 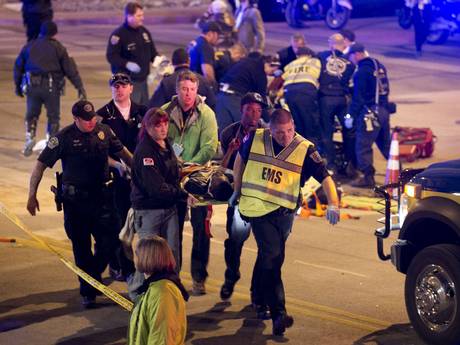 The police chief said the man also hit a cab before jumping out of his car and trying to escape on foot.

Images of ambulances and fire engines and people being treating at the scene were shared on social media.

Police confirmed the news on Twitter and also appealed for people who had been in the area at the time to come forward.

“If you witnessed the incident that took place at 9th and Red River please make sure you talk with an officer on the scene. #SXSW,” they wrote.

The collision happened outside of the Mohawk venue. According to its website, Tyler the Creator was due to perform at the venue in the early hours of Thursday morning.

The venue also posted a message on the social media site, confirming the shows and events had been cancelled.

“Our thoughts and prayers are with the families of the victims from tonight’s tragedy. Make sure everyone you know is home safe tonight,” they added.

SXSW, which runs from March 11 to March 16, is known as one of the world’s best platforms for rising talent.