A South African forensics expert has swung a cricket bat at a toilet door erected in the courtroom at Oscar Pistorius’ murder trial in Pretoria to demonstrate key pieces of evidence.

Oscar Pistorius, 27, says he mistakenly shot his girlfriend Reeva Steenkamp through the door, believing she was a burglar, then broke it down with the bat.

The prosecution says the Paralympic champion tried to beat down the door and then fired the gun.

Forensic expert Police Colonel Johan Vermeulen also said he thought Oscar Pistorius had hit the door with the bat from a low angle, indicating he was not wearing his prosthetic legs at the time.

This contradicts the athlete’s claim that he had been wearing his artificial limbs.

Correspondents say whether or not Oscar Pistorius was on his prosthetic limbs is important because it could match parts of his story that he accidentally shot Reeva Steenkamp, or expose inconsistencies in it.

The damaged toilet door, with four bullet holes, was examined in the courtroom along with a replica of the toilet cubicle. 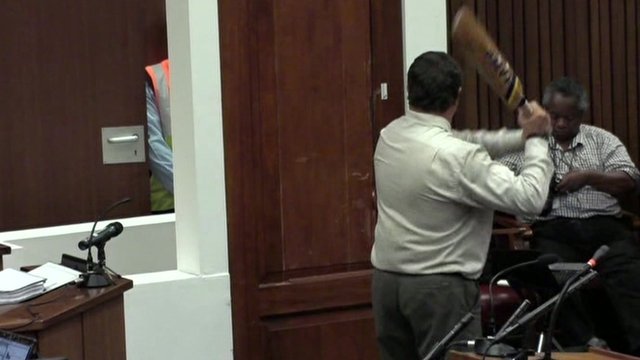 Forensic evidence on the location from which shots were fired, how they were grouped and their trajectory were presented to the court on Wednesday.

The defense team claimed that Oscar Pistorius therefore would not have been able to balance on his stumps and break down the door using a cricket bat.

Defense lawyer Barry Roux also alleged that police had contaminated the crime scene by stepping on the door.

Col. Johan Vermeulen argued that if Oscar Pistorius was balanced enough to fire a gun, he could also break down a door with a bat.

The forensics expert argued that the angle and location of the marks on the door suggested that they had been caused by someone much shorter than him.

The defense team argued that a mark on the bottom of the door showed where Oscar Pistorius had tried to kick open the door using his prosthetic legs. Col. Johan Vermeulen agreed that this was possible.

“The marks on the door are actually consistent with him not having his legs on and I suspect they must be similar to the height that he was when he fired the shots,” he told the court.

The prosecution argues that Oscar Pistorius hit the door with the cricket bat before the shots were fired, but the defense claims it was the other way round.

The trial is now halfway through its second week.

Earlier on Wednesday, a friend of Oscar Pistorius, Darren Fresco, claimed that the athlete had driven at 124mph and that he had taken a picture of the speedometer to prove it.

The defense team alleged that Darren Fresco was himself driving at the time and had therefore fabricated evidence.

On Tuesday, Oscar Pistorius’ defense team questioned a pathologist’s finding that Reeva Steenkamp had eaten less than two hours before he killed her.

This contradicts Oscar Pistorius’ account that the pair had been in bed for several hours before the shooting.