President Barack Obama has urged his Russian counterpart Vladimir Putin to pull his troops back from Ukraine.

In a 90-minute phone conversation, Barack Obama urged Vladimir Putin to pull forces back to bases in Crimea.

Vladimir Putin responded by saying that Moscow reserves the right to protect its interests and those of Russian speakers in Ukraine, the Kremlin said.

Meanwhile, Canada has recalled its ambassador to Moscow for consultations.

Canadian PM Stephen Harper said he was also suspending Canada’s preparations for a G8 summit in the Russian resort of Sochi in June.

Ukraine says it has put its army on full combat alert after Russia’s parliament approved the deployment of Russian troops. 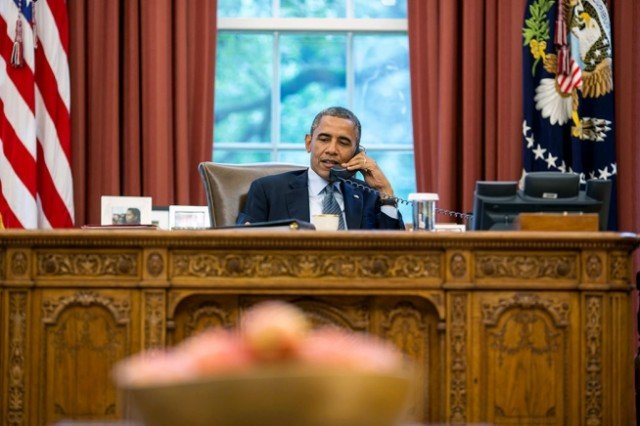 In a 90-minute phone conversation, Barack Obama urged Vladimir Putin to pull forces back to bases in Crimea

According to the White House, Barack Obama told Vladimir Putin that the appropriate way to address any concerns “is peacefully through direct engagement” with the Ukrainian government and international mediating bodies.

Barack Obama told Vladimir Putin his actions were a “breach of international law, including Russia’s obligations under the UN Charter, and of its 1997 military basing agreement with Ukraine”, a statement added.

The Kremlin said that in his phone call with Barack Obama, President Vladimir Putin “underlined that there are real threats to the life and health of Russian citizens and compatriots on Ukrainian territory”.

As diplomatic efforts increased, US Secretary of State John Kerry said he had spoken with foreign ministers from Europe and Canada as well as EU foreign policy chief Catherine Ashton and the Japanese envoy to the US “to co-ordinate on next steps”.

The UN Security Council held an emergency session on the crisis on Saturday, and NATO has called emergency talks to be held on Sunday at 1200 GMT.