Subrata Roy – the chairman of Sahara, one of India’s biggest businesses – has been arrested after he surrendered to the police.

The Supreme Court had ordered the arrest of Subrata Roy on Wednesday after he failed to appear before judges in a case of fraud.

Two Sahara firms are accused of raising 240 billion rupees ($3.9 billion) through bonds that were found to be illegal.

Market regulators say Subrata Roy failed to refund the money to millions of investors despite a court order.

He is expected to remain in custody until March 4 as the Supreme Court refused to take up his bail petition on Friday, saying it was “not urgent”.

“Mr. Roy willfully submitted himself before [the northern city of] Lucknow police. He is co-operating with all authorities,” his son, Seemanto Roy, told a press conference in Delhi.

Senior police official Habibul Hasan in Lucknow said the businessman would be produced before the magistrate soon. 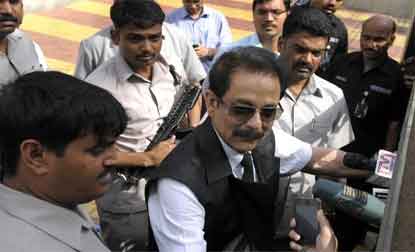 Earlier on Friday, Subrata Roy issued a statement saying he was not “absconding” from arrest after police in Lucknow said they had raided his house on Thursday, but failed to find him.

Subrata Roy said he was indeed in Lucknow but had stepped out to consult doctors about his ailing mother.

On Wednesday, angry judges ordered the businessman’s arrest after his lawyer said the Sahara chief had been unable to appear in court since his 92-year-old mother was very unwell.

Subrata Roy and his rags-to-riches life story is a household name in India.