Home Breaking News US may pull all troops out of Afghanistan by the end of...

Barack Obama has warned Afghan President Hamid Karzai that the US may pull all of its troops out of his country by the year’s end.

President Obama conveyed the message in a phone call to Hamid Karzai, who has refused to sign a security agreement.

The US insists this agreement must be in place before it commits to leaving some troops behind for counter-insurgent operations and training.

The US has had troops in Afghanistan since 2001 when it toppled the Taliban.

Its forces went into the country following the 9/11 attacks on the US. With Afghan and Western allies, they quickly overthrew the Taliban authorities, but have faced insurgent attacks since then.

Correspondents say the disagreement over the bilateral security agreement (BSA) is the latest step in the long and deteriorating relationship between Washington and Hamid Karzai, who was once seen as a key US ally. 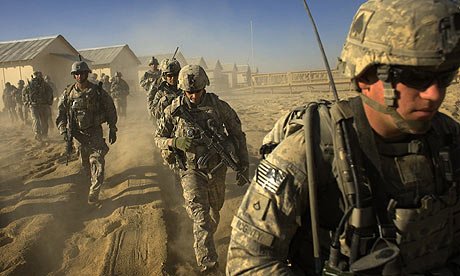 The BSA, which offers legal protection for US troops and defines a post-2014 NATO training and anti-insurgent mission, was agreed by the two countries last year after months of negotiation.

It was endorsed at a national gathering (Loya Jirga) of Afghan elders in Kabul in November.

But Hamid Karzai has refused to sign the deal until a peace process is under way with the Taliban, adding that if he were to sign it, he would become responsible if Afghans were killed by US bombs.

“President Obama told President Karzai that because he has demonstrated that it is unlikely that he will sign the BSA [Bilateral Security Agreement], the United States is moving forward with additional contingency planning,” the White House said in a statement.

“Specifically, President Obama has asked the Pentagon to ensure that it has adequate plans in place to accomplish an orderly withdrawal by the end of the year should the United States not keep any troops in Afghanistan after 2014.

“Furthermore, the longer we go without a BSA, the more likely it will be that any post-2014 US mission will be smaller in scale and ambition.”

While Hamid Karzai has refused to sign the BSA, some candidates in April’s Afghan presidential elections have indicated they would.

Hamid Karzai, who has served two terms as Afghanistan’s first and only president since the Taliban were ousted from power in 2001, is obliged by law to stand down after the next election.

Analysts say the US statement clearly implies that Hamid Karzai’s stance will harm Afghanistan’s security long after he leaves office.