South Korea and US joint military drills have begun, amid rare family reunions between North and South Korean relatives separated for decades.

The annual military exercises will last until April 18.

They will involve Key Resolve, a computer-based simulation, and Foal Eagle, which involves air, ground and naval drills.

Pyongyang is opposed to the drills and had previously threatened to cancel the reunions if the exercises went ahead.

The military drills will involve more than 12,500 US troops.

The US and South Korea describe the annual drills as defensive in nature, but Pyongyang has described them as “exercises of war”.

Last year, the exercises led to a prolonged surge in tensions, with North Korea threatening pre-emptive nuclear strikes and attacks on South Korean and US targets.

The rhetoric this year has so far been relatively mild, but the drills are scheduled to last until April, and many here see them as the toughest test yet of whether ties between the two Koreas are warming. 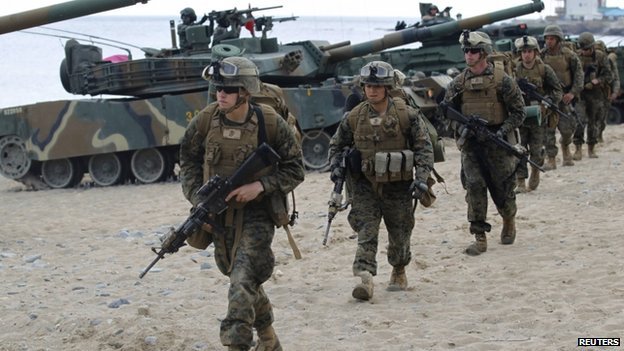 Speaking on Monday, South Korean Defense Ministry spokesman Kim Min-seok said: “As of now, there are no unusual movements from North Korea. We will only take action against North Korea if it makes provocations or denunciations.”

Also on Monday, around 360 South Koreans met their North Korean relatives for the first time since the 1950-1953 Korean War, at a family reunion event in North Korea’s Mount Kumgang resort.

They were the second set of relatives chosen to attend the reunions, which come amid an apparent thaw in inter-Korean ties.

Many people were separated from their relatives by the division of the Korean peninsula after the Korean War.

Pyongyang has been accused of using the family reunions, which are highly emotional events, as a bargaining chip.

North Korea has in the past canceled the reunions after the South took actions it opposed – most recently in September.

Meanwhile, South Korea also offered to assist the North with tackling an outbreak of foot-and-mouth disease.

North Korean state media said that thousands of pigs had been affected by the disease.

South Korea, which has also been hit by outbreaks before, has offered to send aid, including medical goods and vaccines, officials said.