Joaquin “Shorty” Guzman – Mexico’s top drug lord and one of the world’s most wanted drug baron – has been arrested in Mexico.

El Chapo (Shorty) Guzman was the leader of the Sinaloa cartel, which smuggles huge amounts of illegal drugs into the US.

He had been on the run since escaping a high-security prison in a laundry basket in 2001.

Mexican police arrested him in Sinaloa state, in a joint operation with US anti-drugs forces.

Mexico’s President Enrique Pena Nieto used his Twitter account to praise the forces involved in the arrest in the north-western resort of Mazatlan, in Sinaloa state.

Joaquin Guzman was taken to Mexico City and paraded before the media, before boarding a helicopter surrounded by heavily armed troops.

The US state department had offered a reward of up to $5 million for information leading to his arrest.

US Attorney General Eric Holder described Shorty Guzman’s arrest as “a landmark achievement” for Mexico and “a victory for the citizens of both Mexico and the United States”. 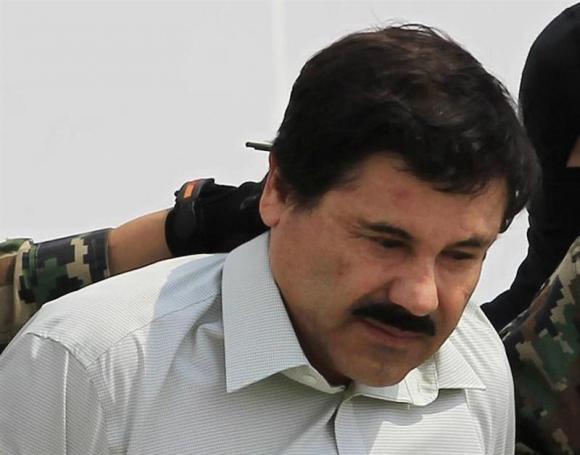 Joaquin El Chapo Guzman was the leader of the Sinaloa cartel, which smuggles huge amounts of illegal drugs into the US (photo Reuters)

Shorty Guzman has been indicted in the US on federal trafficking charges.

The Sinaloa cartel controls much of the flow of cocaine, marijuana and methamphetamine to the US.

Joaquin Guzman’s arrest is a big boost for the administration of Enrique Pena Nieto.

Enrique Pena Nieto, who took office just over two years ago, said he intended to change the “war on drugs” policy of his predecessor, Felipe Calderon, which critics say led to a rise in violence throughout Mexico.

But Mexican police and troops have killed or arrested key figures in the drugs cartels since Enrique Pena Nieto came to power.

The US has also arrested several associates and relatives of Shorty Guzman.

In May 2012, the US Treasury Department put two of his sons – Ivan Archivaldo Guzman Salazar and Ovidio Guzman Lopez – on its blacklist of drugs kingpins.

Their assets were frozen and US nationals and companies were prevented from doing business with them.

Shorty Guzman’s father-in-law, Ines Coronel, was arrested nearly a year ago. He was accused of smuggling drugs into the US.

Joaquin Guzman was born in the town of Badiraguato, probably 56 years ago, and became an important figure in the drug cartels in the 1980s.