The letter said Maria Alyokhina and Nadezhda Tolokonnikova had forgotten about the “aspirations and ideals of our group”.

Maria Alyokhina and Nadezhda Tolokonnikova performed alongside Madonna at a concert in New York on Wednesday.

They were jailed for two years after singing a protest song in a Moscow cathedral in 2012 but were freed in December. 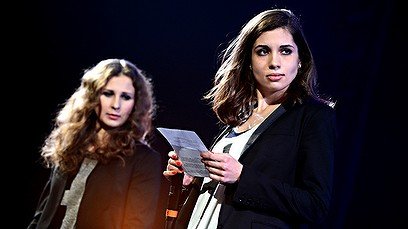 The six members of the collective who signed the letter – Garadja, Fara, Shaiba, Cat, Seraphima and Schumacher – say they wish to remain anonymous.

They said that their group belonged to a “leftist anti-capitalist ideology” but that the pair had become “institutionalized advocates of prisoners’ rights”.

The letter read: “Unfortunately for us, they are being so carried away with the problems in Russian prisons, that they completely forgot about the aspirations and ideals of our group – feminism, separatist resistance, fight against authoritarianism and personality cult, all of which, as a matter of fact, was the cause for their unjust punishment.”

The remaining members of the group criticized Maria Alyokhina and Nadezhda Tolokonnikova for appearing at the Amnesty International concert in New York.

“Our performances are always <<illegal>>, staged only in unpredictable locations and public places not designed for traditional entertainment,” the group said.

The group said that although Maria Alyokhina and Nadezhda Tolokonnikova had repeatedly stressed they were no longer members, the public announcement before their speech spoke of “the first legal performance of Pussy Riot”.

The letter did praise the former members for their new cause.

However, it added: “Unfortunately, we cannot congratulate them with this in person, because they refuse to have any contact with us.”