One of their leaders has been shot dead during a clash with government supporters just outside the capital, Bangkok.

Advance voting has reportedly been cancelled in a number of locations.

Anti-government activists want Prime Minister Yingluck Shinawatra to step down and the political system to be reformed.

Suthin Taratin was speaking on top of a truck, which was part of a rally at a polling station where advanced voting was supposed to take place, when he was struck by gunfire.

He died later in hospital.

Crowds of flag-waving demonstrators chained the doors of polling stations shut, despite promises by protest leaders not to obstruct the polls.

The protesters surrounded polling stations in Bangkok and southern Thailand in an attempt to stop people voting. 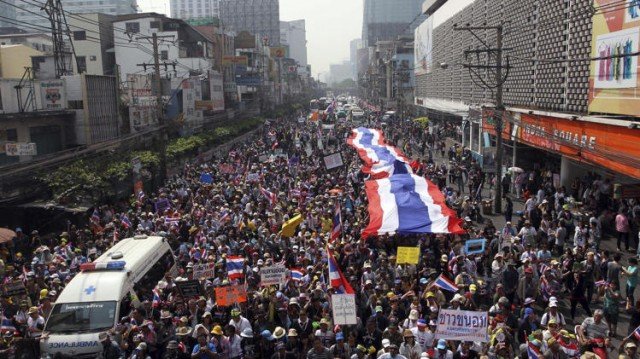 Voting was either blocked completely or halted at 48 out of 50 polling stations in Bangkok.

Thailand’s election commission has called for the general vote scheduled for February 2 to be postponed because of possible disruption and violence.

But the government has so far insisted that the election must go ahead on schedule.

The latest disturbances comes despite a pledge from protest leader Suthep Thaugsuban, who said on Saturday that his supporters would not obstruct advance voting – although they would demonstrate outside polling stations.

The protest movement says it is not obstructing the poll, but that “supporters are simply protesting the advance polls held today by surrounding/standing in front of election units”, in a statement on its Facebook page.

Advance voting is for those unable to take part in the February election.

A state of emergency is in place as the authorities struggle to cope with the unrest.

Protesters, who started their campaign in November, want to install an unelected “people’s council” to run the country until the political system is changed.

They say Yingluck Shinawatra’s government is being influenced by her brother, exiled former leader Thaksin Shinawatra.