Rebecca Robertson, 24, studied fashion in LA, but then came back to Louisiana for what Willie thought was a visit. But when Rebecca brings a million suitcases and a French bull dog, it’s clear that this isn’t a two-day trip. Rebecca, however, is welcomed home with open arms and a planned out surprise party — the Robertson men bought a banner that says “Congratulations” instead of “Welcome Home” because it was on sale. 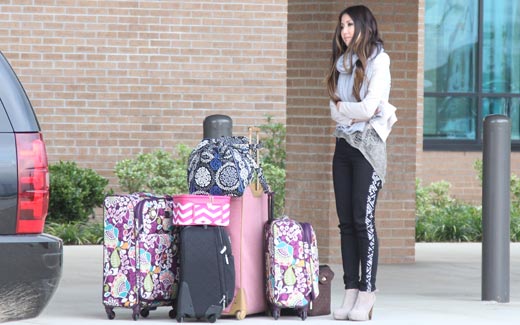 Rebecca Robertson studied fashion in LA and came back to Louisiana

The other new character is a family member of Korie Robertson. John David is Willie’s new assistant who Jase Robertson said only got hired because: “He just wanted someone heavier and hairier so that he would look better by comparison.”

At first there’s tension in the workplace — John David wears flip flops, brings lukewarm donuts, and doesn’t know how to blow a duck call — but he makes up for it after he buys the team a new basketball.

John David won a place in Willie’s heart because he can recite Nacho Libre ad nauseam.

Uncle Si Robertson is sick, so he has planted his “microbe” infested body on Phil’s couch to be taken care of by Miss Kay.

Si Robertson has also brought every single movie in the Air Bud franchise.

“Look, I’m a connoisseur when it comes to animal sports movies – Air Bud is an epic classic,” Si Robertson says.

“It blows Rudy out of the water … it makes Field of Dreams look like Rookie of the Year.”

Phil Robertson can’t agree because it’s too unrealistic. A dog just can’t dunk a basketball! He prefers the Bourne series.

There was also a lot of talk of microbes throughout the two episodes. Phil Robertson thinks Uncle Si is a hypochondriac who has claimed to have everything from bird flu to sausage fingers.

In the second part of the show, Phil Robertson has his own bizarre microbe philosophies.

Jep Robertson says his father used to expose them to microbes all the time to build up immunities. Phil Robertson suggests Jep do the same for his kids by having them go outside and throw dung at each other.

Meanwhile, Uncle Si organized an age-inappropriate treasure hunt for Jep’s kids that was as confusing to its participants as it was to the audience. It culminated in digging up candy buried in what appeared to be a grave site.