According to a new study, women who lift weights in the gym cut their risk of developing diabetes.

The study tracked the health of nearly 100,000 US nurses over a period of eight years.

Lifting weights, doing press-ups or similar resistance exercises to give the muscles a workout was linked with a lower risk of diabetes, the work in PLoS Medicine shows.

Adults are already advised to do such exercise at least twice a week.

The benefit seen in the study was on top of any gained from doing aerobic workouts that exercise the heart and lungs – something which adults are meant to do for at least 150 minutes a week. 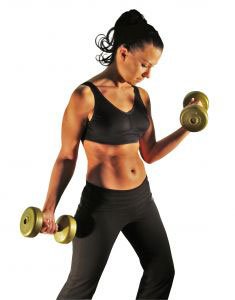 Women who engaged in at least 150 minutes a week of aerobic activity and at least an hour a week of muscle-strengthening activities had the most substantial risk reduction compared with inactive women. They cut their odds of developing type 2 diabetes by a third.

Experts already know that regular aerobic exercise, such as jogging, brisk walking or swimming, can help stave off type 2 diabetes.

The Harvard Medical School researchers point out that their work is not perfect – it looked at only nurses who were mostly Caucasian and relied on the study participants reporting how much exercise they did rather than directly measuring it.

But they say their findings chime with similar results they already have for men.

They believe the explanation may be partly down to maintaining a greater muscle mass to act as a buffer against diabetes.

Insulin enables the body to use sugar as energy and store any excess in the liver and muscle.