The polar vortex that has left people in North America shivering for days, shattering century-old temperature records, is loosening its icy grip.

Temperatures are rising in the Midwest and East, which has borne the brunt of polar vortex, but are still below freezing in many areas.

At least 21 people have died since Sunday as a result of the weather, and more than 11,000 flights were grounded.

US natural gas usage hit an all-time record in the US to meet heat demands.

Forecasters predicted weather would return to normal across much of the US in the coming days, after 50 US cities set new record low temperatures on Tuesday.

The National Weather Service predicted “a much-anticipated warm up” for much of the eastern US on Wednesday.

The Midwest – which experienced -37C (-35F) in recent days – also warmed slightly, but still faced temperatures 15 to 25 degrees below average. 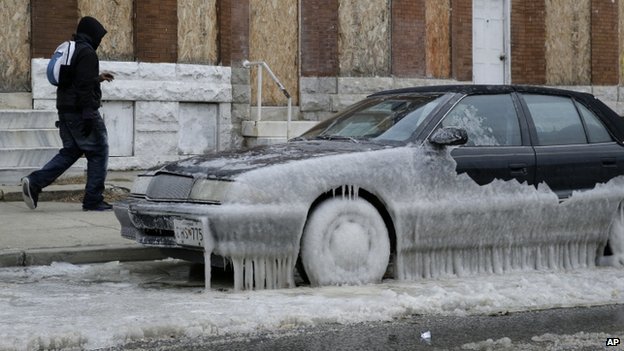 Temperatures in parts of North America plunged so low this week that they eclipsed readings recently recorded on the Red Planet by the Mars Rover.

Even Alabama’s top official was not immune to the extreme cold.

Governor Robert Bentley faced an estimated $50,000 in damage after a water pipe froze and burst in the attic of his home in Tuscaloosa.

Guy Walton, a meteorologist at The Weather Channel, told media that the worst of the Arctic outbreak is over.

“It will be getting dramatically warmer from today,” he said on Wednesday.

“By Thursday temperatures will be almost back to normal.”

Scientists also posited a silver lining to the cold snap, saying it could kill some of the pests that have ravaged northern forests.

The low temperatures may also slow the migration of invasive species and prevent erosion of wetlands, they say.