The Northeast and Upper Midwest are braced for potentially record-breaking low temperatures as a “polar vortex” brings more freezing weather.

A winter storm has already blanketed areas of Canada and the north-eastern US with up to 2ft of snow.

The snow storm has been blamed for 16 deaths in recent days and the cancellation of more than 3,700 flights this weekend.

Schools in Chicago are among those closing as officials tell people to stay indoors on Monday.

Meanwhile, a plane from Toronto slid into snow as it turned onto a taxiway after landing at New York’s JFK airport on Sunday.

No-one was hurt in the incident but all flights at the airport were suspended for two hours because of icy runways.

The plunging temperatures result from the polar vortex, an anti-clockwise pool of cold, dense air.

Forecasters say temperatures in the north and central US could feel as low as -60F (-51C) with the effect of wind chill.

Authorities have warned residents to remain indoors, both for their own safety and to keep roads clear for snow removal. 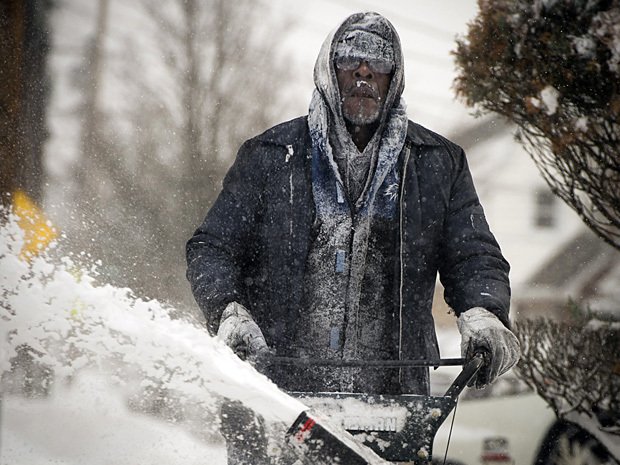 In Canada, thousands of people on the island of Newfoundland remain without power due to a transformer fire linked to heavy snow.

“The coldest weather in years will be making its presence known from the Upper Midwest to the Mid-Atlantic region for the beginning of the work week,” the US National Weather Service said in a statement.

The states of Ohio, South Dakota and Illinois are among those set to be hit. Tennessee and Kentucky are forecast to see several inches of snow.

The weather service said “an incredibly strong surge of bitterly cold Arctic air” was sweeping across the country until Tuesday.

It is set to continue to the north-east, where residents are still digging out from the week’s deadly snowstorm.

It could bring some of the coldest temperatures in two decades.

In Canada, the temperature dropped as low as -20F (-29C) in Toronto and -36F (-38C) in Quebec City with wind chill on Thursday – the lowest seen in at least two decades there.

Heavy snow has also affected US states including New York, Connecticut and Massachusetts. Boston was said to be the worst hit with nearly 18 in of snow.

Schools have also been closed across the state of Minnesota for Monday, as well as for parts of Wisconsin, Illinois and Indiana, among others.

Officials in Chicago, Illinois reversed a decision to keep schools open following criticism from a teachers’ union, according to the Associated Press.

State offices were to stay closed in neighboring Indiana where a state of emergency was declared in Lake County in the northwest, allowing only emergency or law enforcement vehicles on the roads.

The Green Bay Packers football team handed out hot chocolate and hand warmers to fans at a game being played in Wisconsin on Sunday. Doctors had urged fans to wear at least three layers of clothing.

Sixteen deaths have been blamed on the wide-ranging storm, according to the Associated Press news agency.