Russian company Yota has launched a smartphone with two screens – one of which uses e-ink technology and is “always on”.

The Android-powered phone promises to extend battery life by transferring web pages and other applications to the e-ink screen.

Experts said it may prove attractive to users fed up with drained batteries.

The phone has one LCD display, similar to those found on other smartphones, and a second e-ink screen which the company says lets users see the information they want without having to wake up the phone.

“Why? Because users worry that messages or information they need or want are hidden behind their phone’s black screen. This is a huge distraction and can impede meaningful interaction with our friends, families and colleagues.” 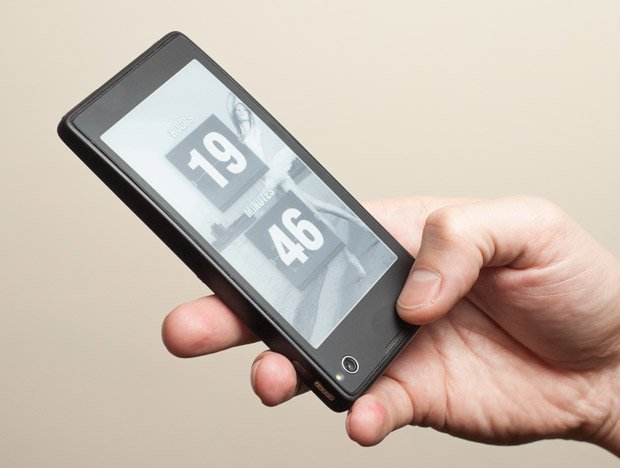 St Petersburg-based Yota is best known for making modems and router equipment. The dual-screen smartphone, which was first announced in 2012, is the company’s first mobile phone.

Yota plans to launch the phone in 20 other countries by March 2014.

It also features a 1.5GHz dual-core processor and a 12-megapixel rear camera and will cost 499 euros.

E-ink displays are commonly used for e-book readers and consume very little power. They are also easier to read in the sun than their LCD equivalents, but offer a slower refresh rate making them unsuitable for videos or most games.

The YotaPhone has some smart ideas about how the secondary e-ink screen could be used.

E-readers could be slimmer in future after a thinner screen was developed by the company E Ink.

The new screen technology, known as Fina, is up to 50% lighter and thinner than current screens according to the company.