Saudi campaigner Aziza al Yousef has been stopped by police as she was driving through Riyadh.

Aziza al Yousef is a leading campaigner for giving women the right to drive.

Photos of Aziza al Yousef were posted on Friday morning as she was seen at the wheel.

On her Twitter page, Eman al Nafjan provided a running account of their drive, saying they bought a bunch of bananas without anyone batting an eyelid.

Eman al Nafjan posted a photo of them filling up at a petrol station and expressed her satisfaction that this all seemed to be treated as an everyday occurrence.

But then they were spotted and reported to the police, who stopped them.

Both were asked to sign a pledge that they would not drive again. Eman al Nafjan refused to. 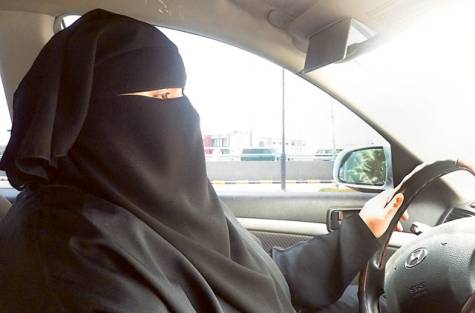 On Twitter, while still with the police, she said that if she was asked to call her male guardian, she would simply say that she was her own guardian. But her guardian – known as a mahram – was called against her wishes.

The two women were then released. Eman al Nafjan described her companion as the bravest and most courageous of drivers. It was only two days ago that Aziza al Yousef – with another activist, Hala al-Dosari – had a meeting with the Interior Minister, Prince Mohammed bin Nayef.

The prince has long been one of the most powerful men in the country and is seen as a possible future king – representing a younger generation than the current leaders. Activists said the meeting was positive and the minister sympathetic.

No-one expected this to herald any big change in the immediate future. Reform is a gradual process in Saudi Arabia and there remain powerful factions opposed to lifting the driving ban on women.

But the meeting came after activists re-launched a campaign several months ago with the aim of making the idea of women driving in Saudi Arabia a normal part of life.

They originally set October 26 as a day for women – with the support of Saudi men – to take to the wheel. Dozens did, but the authorities made clear they would not accept a mass flouting of the ban.

Since then, activists have recast the campaign around the non-existent day of November 31 – a sign that it would continue indefinitely. Several women have been driving and posting videos of themselves since.

The meeting with Prince Mohammed bin Nayef had been seen as possibly offering fresh hope that the authorities might be taking a softer stance.

The brief detention of Aziza al Yousef and Eman al Nafjan is an abrupt reminder that nothing can be taken for granted in Saudi Arabia – and that a shift one way often only signals a shift in the exact opposite direction a few days later.