Hugh Jackman revealed he has been treated for skin cancer after seeking advice for a mark on his nose.

Hugh Jackman, 45, posted an image of his face with a bandage on his nose on his Instagram account and wrote: “Please don’t be foolish like me. Get yourself checked. And USE sunscreen!!!”

The actor said he had been diagnosed with basal cell carcinoma (BCC).

BCC usually develops on skin exposed to the sun, and accounts for about 75% of skin cancers. 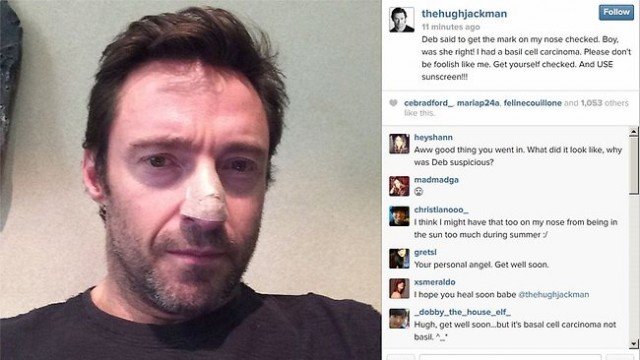 Hugh Jackman, who was nominated for an Oscar last year for his performance as Jean Valjean in Les Miserables, said his wife, Deborra-Lee Furness, had told him to seek medical advice.

“Deb said to get the mark on my nose checked. Boy, was she right!”

Hugh Jackman did not say when he was diagnosed or what treatment he received, but said that anyone with concerns should seek medical advice.

BCC produces cancerous cells on the surface of the skin. Surgery is the main treatment. If left untreated, it rarely spreads to other parts of the body, but it can damage or disfigure surrounding tissue.