Albanian PM Edi Rama says his country will not allow the destruction of Syrian chemical weapons on its soil.

Edi Rama was responding to two days of protests in Tirana and other cities.

Albania recently destroyed its own chemical stockpile, and the US had requested that it host the dismantling of Syria’s arsenal.

Under the deal brokered by Russia to remove Syria’s chemical weapons, it was agreed that they should be destroyed outside the country if possible. 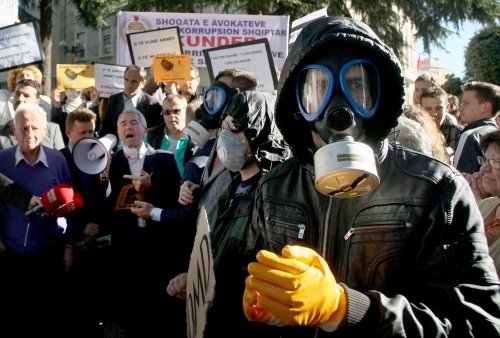 Edi Rama attacked the Albanian opposition for having criticized the government’s willingness to consider the idea.

A key meeting of the Organization for the Prohibition of Chemical Weapons (OPCW) – the international watchdog supervising the destruction – had adjourned for several hours, awaiting Albania’s decision.

The OPCW needs to come up with an alternative quickly, as the deadline for a detailed plan on destroying Damascus’s toxic agents runs out on Friday.

France has been named as a possible alternative site for destroying Syria’s 1,000 or so tonnes of chemical arms.

Norway has pledged to send a civilian cargo ship and a navy frigate to Syrian ports to pick up the weapons and carry them elsewhere for destruction.

However, Norway said that it could not destroy the weapons on its own soil because it lacked the expertise.