President Benigno Aquino has declared a state of national calamity in Philippines in order to speed relief efforts for victims of Typhoon Haiyan.

In a statement, Benigno Aquino said the two worst affected provinces, Leyte and Samar, had suffered massive destruction and loss of life.

Thousands of survivors are still desperately waiting for the aid effort to reach them.

Tacloban is one of the worst affected cities.

Hundreds of thousands more people have been displaced after the high winds and floodwaters destroyed their homes. Damage to roads and airports has delayed the delivery of aid.

One of the most powerful storms on record to make landfall, Typhoon Haiyan – named “Yolanda” by Filipino authorities – struck the coastal provinces of Leyte and Samar on Friday. 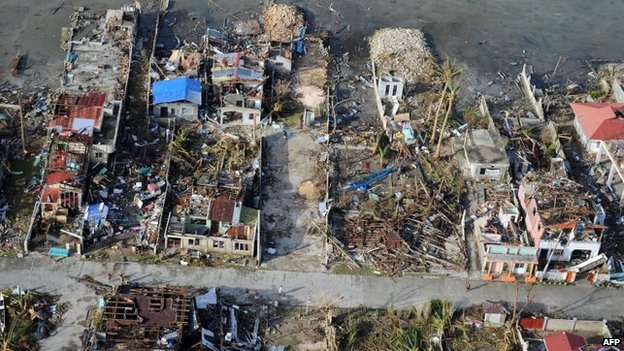 It then headed west, sweeping through six central Philippine islands.

More than nine million people have been affected in the Philippines. Many are now struggling to survive without food, shelter or clean drinking water.

A huge international relief effort is under way, but rescue workers have struggled to reach some towns and villages cut off since the storm.

However, reports from Tacloban say that soldiers have been on the streets distributing food and water to some residents and the US military has sent marines to the city.

The head of the Philippine Red Cross, Richard Gordon, described the situation as “absolute bedlam”.

A Philippine military spokesman was quoted as saying on Monday that 942 people had died in the typhoon’s aftermath, though it is clear the official death toll will rise significantly.

Almost 630,000 people have been reported displaced.