Justin Bieber was charged with vandalism on November 8 for  after his highly-publicized graffiti session that took place three days before.

Police received a complaint about Justin Bieber, 19, and his friends spray painting the wall of the former Hotel Nacional in Rio de Janeiro on November 5.

Justin Bieber, who was in Rio de Janeiro for a concert, reportedly had left the property by the time authorities arrived. Later that day, Brazil’s biggest news outlet posted photos on its website of Justin Bieber, in artistic action. 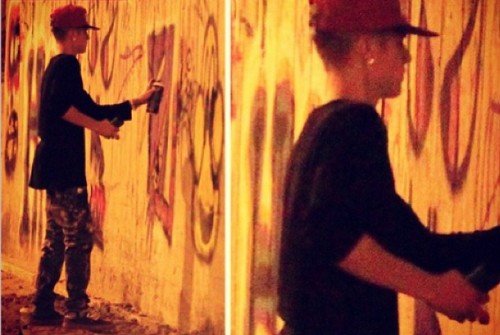 In Brazil, defacing buildings is a crime that could lead to a fine and up to one year in jail.

Local authorities then opened an investigation involving three days of testimony from the photographers who caught him painting, officers and even Justin Bieber’s security personnel.

However, the singer will avoid time behind bars.He will pay a fine, although that cost has yet to be determined.

This is not Justin Bieber’s first run-in with local authorities over his penchant for spray-painting. While in Bogota last week, the singer spray-painted a wall lining one of the Colombian city’s biggest streets, and was escorted into a police car by officers. Overall, the South American leg of Justin Bieber’s Believe tour has been rife with controversy.

Justin Bieber is set to perform in Buenos Aires on November 9-10.