Ghastly webs with giant black spiders adorned an orange-hued White House on Thursday, slithering down from the Truman Balcony along the South Portico, where haystacks and nearly 200 pumpkins dotted the lawn for the annual White House Halloween event.

President Barack Obama and first lady Michelle Obama, clad in orange and black, emerged in the evening to greet the zombies, wizards and superheroes waiting diligently to hear the president’s response to an eerie query: Trick or treat?

It was treats – thousands of packages of jelly beans, dried fruit and White House Sweet Dough Butter Cookies – that Barack and Michelle Obama handed children as they walked across the South Lawn, past stilt-walkers, jugglers and a giant, transparent bubble housing Glinda the Good Witch, who brandished her magic wand in true Wizard-of-Oz fashion. 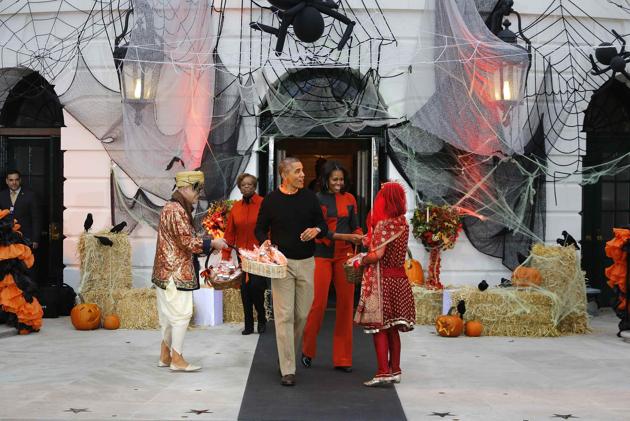 Barack Obama and first lady Michelle Obama, clad in orange and black, emerged in the evening to greet the zombies, wizards and superheroes

Fog billowed across the lawn, obscuring the Washington Monument in the distance as children and their parents mingled with White House staffers dressed as football players, vampires and princesses. A brass band of white-faced skeletons set the mood with creepy Halloween tunes, dancing as they played alongside a family of ghosts camped out near the area where the president’s helicopter normally lifts off.

Even Barack Obama’s dogs donned costumes — no, not the real Sunny and Bo, but topiaries carved from ribbons and pipe cleaners and dressed up, Bo as a pirate and Sunny as a sunflower.

The festivities marked the return of a favorite annual tradition at the White House that had to be scrapped last year. After three straight years of passing out goodies, rain or shine, Obama and the first lady canceled the event last year because of Superstorm Sandy, which had walloped the East Coast earlier in the week.