Thirty five migrants traversing the Sahara desert on their way to Europe have died of thirst in Niger, officials say.

Rhissa Feltou, the mayor of Agadez, the main town in northern Niger, said that 35 of the 60 travelers trying to reach Algeria had died.

Agadez lies on one of the main routes migrants from West Africa use to reach Europe.

Hundreds of migrants have died this month when their boats sank as they tried to cross the Mediterranean Sea. 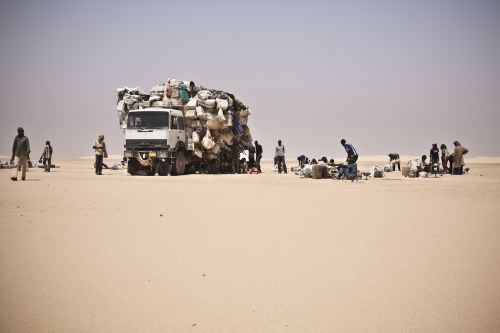 The convoy was heading for Tamanrassett, an Algerian town in the heart of the Sahara, he said.

The mayor of Agadez said that after one vehicle broke down, passengers went to look for spare parts and bring them back for repairs.

He said the migrants broke up into small groups and started walking.

Days later, the survivors who reached Arlit, a centre for uranium mining, alerted the army, but troops arrived too late at the scene, he added.

Those left behind consisted of “entire families, including very many children and women,” Azaoua Mamane, who works for the non-governmental organization Synergie in Arlit, told the AFP news agency.