According to a report in German newspaper Der Spiegel, the US has been spying on Chancellor Angela Merkel’s mobile phone since 2002.

Der Spiegel claims to have seen secret documents from the National Security Agency (NSA) which show Angela Merkel’s number on a list dating from 2002 – before she became chancellor.

Angela Merkel’s number was still on a surveillance list in 2013.

Meanwhile Washington has seen a protest against the NSA’s spying programme.

Several thousand protesters marched to the US Capitol to demand a limit to the surveillance. Some of them held banners in support of the fugitive former contractor Edward Snowden, who revealed the extent of the NSA’s activities.

The nature of the monitoring of Angela Merkel’s mobile phone is not clear from the files, Der Spiegel says. 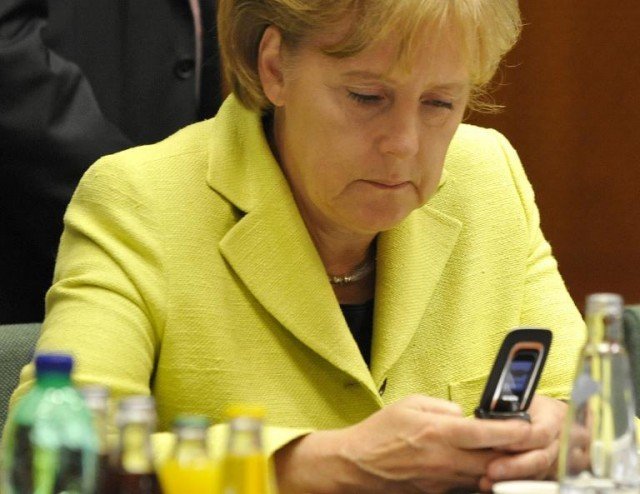 For example, it is possible that the chancellor’s conversations were recorded, or that her contacts were simply assessed.

Germany is sending its top intelligence chiefs to Washington in the coming week to “push forward” an investigation into the spying allegations, which have caused outrage in Germany.

On Friday, Germany and France said they want the US to sign a no-spy deal by the end of the year.

As well as the bugging of Angela Merkel’s phone, there are claims the NSA has monitored millions of telephone calls made by German and French citizens.

The documents seen by Der Spiegel give further details of the NSA’s targeting of European governments.

A unit called Special Collection Services, based in the US embassy in Pariser Platz in Berlin, was responsible for monitoring communications in the German capital’s government quarter.

If the existence of listening stations in US embassies were known, there would be “severe damage for the US’s relations with a foreign government,” the documents said.

Similar units were based in around 80 locations worldwide, according to the documents seen by Der Spiegel, 19 of them in European cities.

The US government had a second German spy base in Frankfurt am Main, the magazine reports.

Angela Merkel phoned President Barack Obama when she first heard of the spying allegations on Wednesday.

Barack Obama promised Angela Merkel he knew nothing of the alleged phone monitoring, the magazine reports. The president apologized to the German chancellor, it said.

Angela Merkel – an Americophile who was awarded the US Presidential Medal of Freedom in 2011 – is said to be shocked that Washington may have engaged in the sort of spying she had to endure growing up in Communist East Germany.