Home World Europe News Russia: Greenpeace activists to be charged with hooliganism instead of piracy

Piracy charges against 30 Greenpeace activists will be replaced with hooliganism charges, according to Russian officials.

The new charge has a maximum penalty of seven years rather than 15, Russian news website Lenta reports.

The Arctic Sunrise ship was seized more than four weeks ago by Russian security forces after activists tried to scale an offshore oil platform.

All 30 people on board – including two freelance journalists – were detained.

So far all bail applications in the case have been refused.

Vladimir Markin, the head of Russia’s main investigating agency the Investigative Committee, told Russian news agencies that the charges had been reclassified. 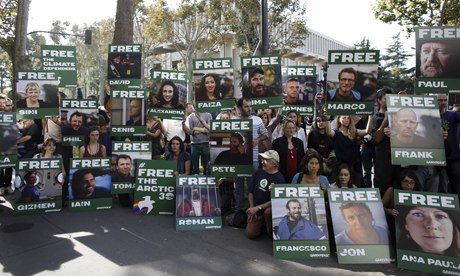 The presidential press secretary, Dmitry Peskov, said the president had no power to influence the courts.

Vladimir Putin said last month that the activists had violated international law but it was “absolutely evident that they are, of course, not pirates”.

Greenpeace Russian programme director, Ivan Blokov, told Russia’s Interfax news agency that there was no case for either piracy or hooliganism charges.

“There are no signs of hooliganism – no violence, no threat of using violence or any damage to property,” he said.

Ivan Blokov added that he was surprised the Russian government had earlier refused to attend international court hearings in Germany over the detentions.

The Netherlands took the case of the Dutch-flagged ship and its crew to the UN tribunal in Hamburg on Monday.

The Russian foreign ministry released a statement pointing out that Moscow had opted out of UN Law of the Sea dispute procedures, which infringe upon sovereignty, in 1997.

All 30 people on board the ship, including 28 activists, have been in custody in the northern port city of Murmansk and complain of being held in harsh conditions,

They were detained when Russian security sources stormed the ship following a protest against drilling for oil in the Arctic.

Greenpeace denies any wrongdoing and is calling for the release of the detainees, who come from 18 countries, and their ship, the Arctic Sunrise.