Carol Burnett has been honored with the Mark Twain Prize for American Humor at the Kennedy Center for Performing Arts on Sunday.

Julie Andrews, Tony Bennett and Tina Fey were among those who performed in her honor at the Kennedy Center.

“This is very encouraging… it was a long time in coming,” Carol Burnett, 80, joked as she accepted the prize.

She added: “I understand because there are so many people funnier than I am, especially here in Washington.

“With any luck, they’ll soon get voted out, and I’ll still have the Mark Twain Prize.”

Tina Fey – creator and star of 30 Rock – applauded Carol Burnett for opening doors for other female comedians. When Carol Burnett first launched her own show, a TV executive told her the genre was “a man’s game”. 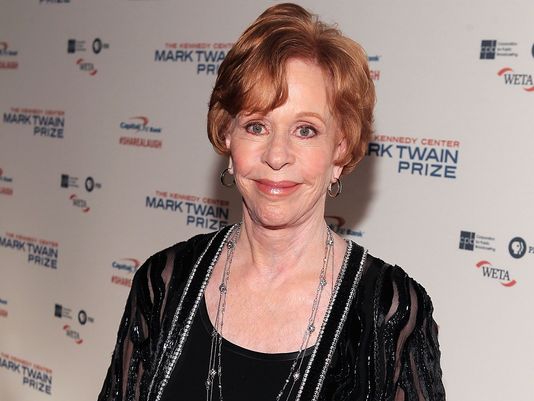 “You mean so much to me,” Tina Fey said.

“I love you in a way that is just shy of creepy,” she joked.

Carol Burnett got her first break when she was talent-spotted by bookers for the Ed Sullivan Show.

She then landed a role on Broadway and began to appear on The Garry Moore Show.

This led to Carol Burnett signing a 10-year contract with CBS to do guest slots on sitcoms and perform in one TV special a year.

The comedian launched the Carol Burnett Show in 1967, with guest stars including Lucille Ball, Jimmy Stewart and Ronald Reagan.

Carol Burnett Show won 22 Emmy awards. The comedian was best known for her “Tarzan” yell and for ending each show by tugging her ear, which was a personal message to her grandmother.

Tim Conway, one of Carol Burnett’s co-stars on her show, joked that he now spends his time travelling around the US for Burnett to receive awards.