Nike has unveiled Fuelband SE – its second generation activity-tracking wristband – addressing criticism that its earlier device failed to recognize that some activities use more energy than others.

The Fuelband SE lets owners define the start and end of a session and then tag it – for example as yoga or basketball.

However, speculation that Nike would add a heart monitor or other new sensor to improve accuracy proved incorrect.

The New York launch came two weeks after the Fitbit Force was unveiled – a rival activity tracker that introduced a height-measuring altimeter that can record how many stairs its owner has climbed.

Jawbone, iHealth, Garmin, Withings and Adidas are among other firms to offer dedicated fitness-measuring gadgets. Meanwhile Samsung and Sony are promoting their newly released smartwatches’ ability to download and run Android-based activity-tracking apps.

One market watcher suggested Nike might have missed a trick. 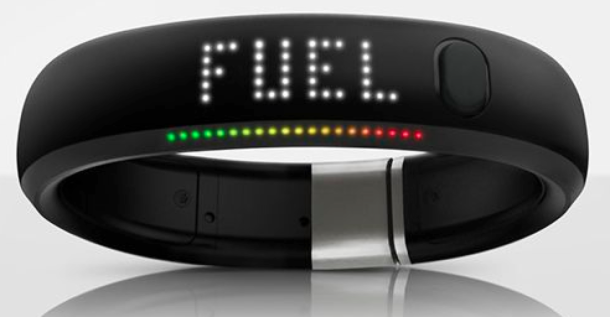 “Since Nike launched the first Fuelband early last year there has been an explosion of fitness wearables and apps,” said Nitin Bhas, senior analyst at the tech consultancy Juniper Research.

“On the one hand you have Apple’s promotion of the new motion processor in its iPhone 5S, which extends battery life when the function is used, and on the other hand you have Fitbit adding new technology.

“But you mustn’t forget that Nike has the fact that it’s an established brand in its favour, unlike some of the other firms involved.”

Other improvements to the Fuelband include an upgrade to the lower-power Bluetooth 4.0 technology, allowing the device to automatically synchronize its data to an iPhone rather than requiring the owner to carry out a series of button presses.

There continues to be no official Fuelband app for Android devices, although users can connect the gadget to a computer to upload their data to a website.

Nike also suggested a redesigned internal circuit board and other changes meant the device offered “greater flexibility” and “improved water resistance”. Issues with the original model meant several users suffered error messages after several months’ use, requiring the bracelet to be replaced.

Like its predecessor, Nike suggests the Fuelband SE can be worn in the shower but should not be submerged for extended periods, for example while swimming.

Nike said that its iOS app also introduced a feature allowing users to work together to hit a fuel score target as well as a way to better monitor how much energy was used at different hours of the day.

The company also announced plans to expand an existing programme to encourage third-party firms to develop software that makes use of the information generated by the device.

Analysts agree that the wearable tech market – which includes devices such as Google’s forthcoming Glass eyewear – is set to expand, but differ over its expected size.

According to a new report from Juniper Research, the sector will grow from $1.4 billion of annual sales this year to $19 billion by 2018.

Nike is adding France, Germany and Japan to its existing Fuelband markets – the US, Canada and the UK.

The Fuelband SE will be available from November 6.