Libya’s Prime Minister Ali Zeidan has called for “rationality and wisdom” after being freed from the custody of militiamen.

Ali Zeidan was abducted from a Tripoli hotel and held for several hours by armed men whose identity has yet to be confirmed.

In a cabinet meeting, PM Ali Zeidan thanked “real revolutionaries” who took part in a security operation to free him.

The motive of the abduction is unclear but some militias had been angered by a US commando raid to capture senior al-Qaeda suspect Anas al-Liby.

Many militia groups saw the raid in Tripoli on Saturday as a breach of Libyan sovereignty and there is growing pressure on the government to explain if it was involved.

One group, the Libya Revolutionaries Operations Room (LROR), said it had captured Ali Zeidan, claiming it was acting on orders from the prosecutor general. But the justice ministry denied this.

The LROR said its actions had not been related to Anas al-Liby’s detention.

The official Lana news agency also named another formal rebel group, the Brigade for the Fight against Crime, as being involved. 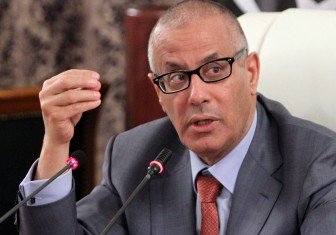 Two years after the overthrow of Colonel Muammar Gaddafi, Libya still has no constitution and divisions between secular and Islamist forces have paralyzed parliament.

The government has been struggling to contain the numerous militias who control many parts of the country.

He thanked those who had helped free him but gave no details about them or the abductors.

Ali Zeidan urged them to “assimilate into the state, and play an active role in it through its civilian and military institutions”.

He added: “Only with an army and the police can a state exist.”

The prime minister said of his capture: “These are accidental things from the revolution’s overflow and they will disappear.”

Ali Zeidan also said Libya would “regain its health” and be “an active, positive nation”.

He assured foreigners the incident had happened “within the context of Libyan political wrangles”.

Ali Zeidan ended by calling for “caution and rationality in handling this matter”.

He had been taken in a pre-dawn raid on the Corinthia Hotel by more than 100 armed men.

Photographs circulating online showed Ali Zeidan being surrounded and led away. There were no reports of violence during his capture.

The prime minister was reportedly held at the interior ministry anti-crime department in Tripoli, where an official said he was treated well.

In a news conference shortly before the release was announced, the government condemned the “criminal act” of his detention and said it would not give in to “blackmail”.

The LROR is one of a number of militias operating in Libya which are nominally attached to government ministries but often act independently and, correspondents say, often have the upper hand over police and army forces.