Pope Francis has announced that Pope John Paul II and Pope John XXIII will be declared saints on April 27, 2014.

The pontiff said in July that he would canonize his two predecessors, after approving a second miracle attributed to John Paul. 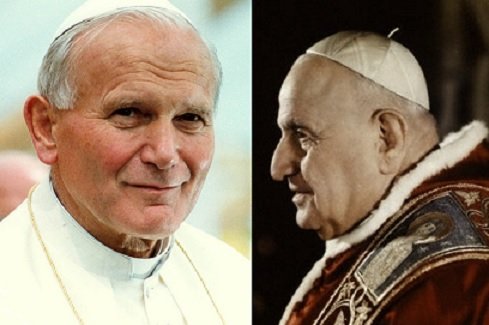 Pope John XXIII was pontiff from 1958 to 1963, calling the Second Vatican Council that transformed the Church.

The decision to canonize the two popes at the same time appears designed to unify Catholics, correspondents say.

Pope John Paul II is a favorite of conservative Catholics, while Pope John XXIII is widely admired by the Church’s progressive wing.

John Paul stood out for his media-friendly, globetrotting style. He was a fierce critic of both communism and what he saw as the excesses of capitalism.

Pope John is remembered for introducing the vernacular to replace Latin in church masses and for creating warmer ties between the Catholic Church and the Jewish faith.

Pope John XXIII has a big following in Italy, where he is known as Il Papa Buono, the good pope.