Miss Philippines, Megan Young, has been crowned Miss World 2013 on the Indonesian island of Bali.

Megan Young, 23, beat 126 other contestants and pledged to be “the best Miss World ever”.

The competition was moved to Bali from the capital, Jakarta, because of protests from hardline Muslim groups.

Security for Saturday’s event was high in Bali, a resort island with a majority Hindu population, but no further demonstrations were reported. 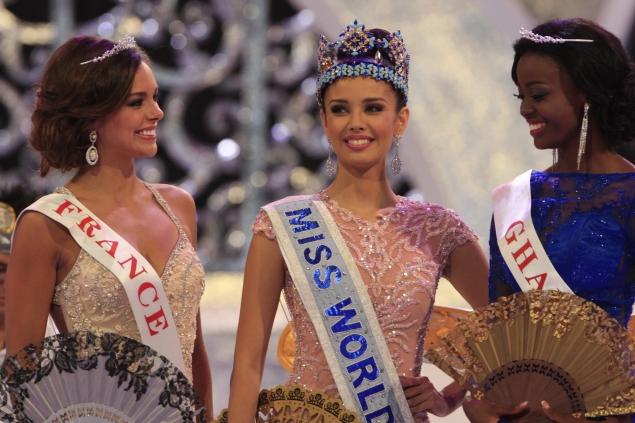 Miss Philippines, Megan Young, has been crowned Miss World 2013 on the Indonesian island of Bali

Wearing a glittering gown, US-born Megan Young, who moved to the Philippines at the age of 10, wept as the Miss World sash was put over her shoulder by 2012 winner Miss China.

Megan Young told the cheering crowd in Nusa Dua in southern Bali she would “be myself in everything I do, to share what I know and to educate people”.

Indonesia is the world’s most populous Muslim country and the organisers had originally offered to abandon the contest’s bikini round in an attempt to address complaints of immorality.

Protests were led by the hardline Islamic Defenders’ Front (FPI), which had planned to cross to the island from East Java but were prevented when the port was shut late on Friday.

Miss World pageant, broadcast in 180 countries, was guarded by heavily armed police with water cannon while some 1,000 FPI members held a prayer session at a mosque outside Jakarta.