The UN has unanimously voted to adopt a binding resolution on ridding Syria of chemical weapons.

At a session in New York, the 15-member Security Council backed the draft document agreed earlier by Russia and the US.

The deal breaks a two-and-a-half year deadlock in the UN over Syria, where fighting between government forces and rebels rages on.

The vote came after the international chemical watchdog agreed on a plan to destroy Syria’s stockpile by mid-2014.

“Tonight the international community has delivered.”

Ban Ki-moon urged the Syrian government to implement the resolution “faithfully and without delay”, and also announced a tentative date of mid-November for a new peace conference in Geneva.

US Secretary of State John Kerry said the UN demonstrated that “diplomacy can be so powerful that it can peacefully defuse the worst weapons of war”.

John Kerry said the resolution would for the first time seek to eliminate entirely a nation’s chemical weapons capability. 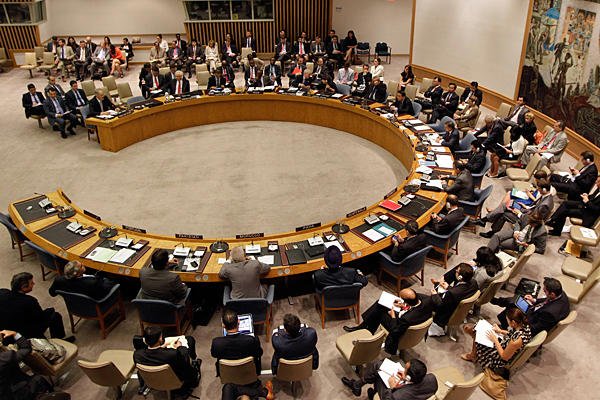 However, he stressed that the success of international efforts was “not only on Damascus’ shoulders” and that Syrian opposition must co-operate.

The UN resolution condemns the use of chemical weapons but does not attribute blame.

The text has two legally binding demands: that Syria abandons its weapons stockpile and that the chemical weapons experts be given unfettered access.

Although the draft refers to Chapter VII of the UN Charter, which allows the use of military force, a second resolution authorizing such a move would be needed.

President Barack Obama earlier said agreement on the issue by council members would be a “potentially huge victory for the international community”.

Previous attempts at a resolution stumbled amid disagreements between Russia and the US on how to deal with the crisis in Syria.

The US – backed by France and the UK – had pushed for a resolution carrying the threat of military action against Syrian President Bashar al-Assad’s armed forces. Russia had opposed this.

But he stressed that countries supporting Syrian rebels should also abide by the adopted document.

The UN vote came just hours after the Organization for the Prohibition of Chemical Weapons (OPCW) adopted what it called “a historic decision on the destruction of Syria’s chemical weapons”.

In a statement after a late-night meeting in The Hague, the watchdog said its executive council “agreed on an accelerated programme for achieving the complete elimination of Syria’s chemical weapons by mid-2014. The decision requires inspections in Syria to commence from 1 October 2013”.

“The decision also calls for ambitious milestones for destruction which will be set by the (executive) council by 15 November.”

OPCW Director General Ahmet Uzumcu said the move “sends an unmistakable message that the international community is coming together to work for peace in Syria”.